In low point of season, Texas gets doubled up by Jayhawks 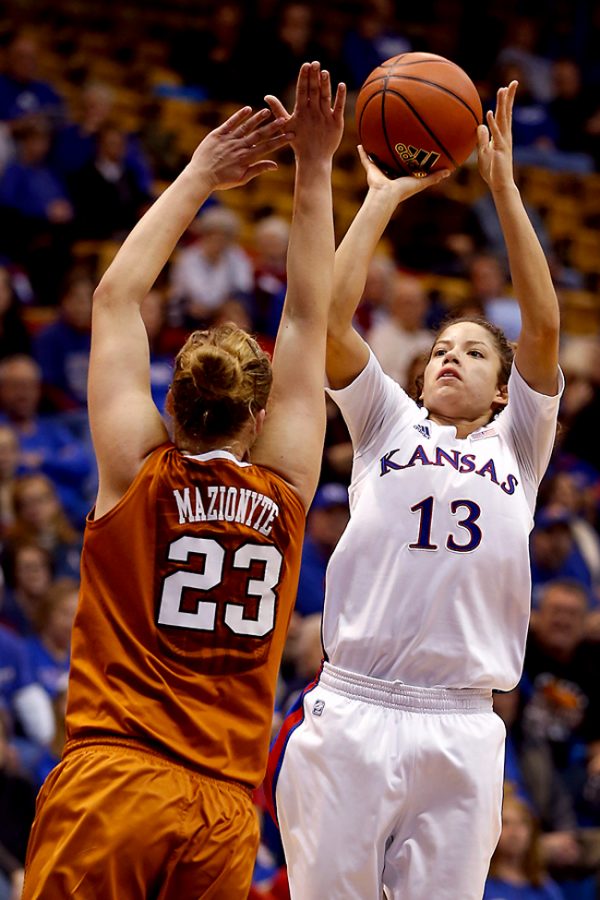 Junior transfer Gigi Mazionyte tries to block against Kansas on Wednesday night in Lawrence. The Longhorns struggled all evening, falling 76-38.

Already reeling in the middle of an awful losing streak, Texas was dealt another blow at the hands of the Kansas Jayhawks.

The Jayhawks lived up to their name by marauding and pillaging the Longhorns to the tune of a 76-38 win. This seems to be the low point of an already dismal season for Texas basketball. The Longhorns’ ninth loss in a row keeps them winless in conference play and, when paired with the men’s five-game losing streak, puts University of Texas basketball squads on a collective 14-game losing streak.

It’s about time to figure out what is going wrong with basketball here in Austin. Both teams have their fair share of excuses. The men have no upperclassmen on scholarship. The women are under a first-year head coach that saw two upperclassmen, Cokie Reed and Chelsea Bass, have to leave the program because of injuries. The team was already shorthanded before Chassidy Fussell and Nneka Enemkpali served one-game suspensions for violating team rules.

Texas’ standards are usually very high in the realm of athletics. Now it seems that as soon as Texas wins a game its fans will be ready to storm the court — assuming there are enough fans at the game to properly do that.

Following the resignation of Gail Goestenkors in March of last year, Karen Aston was brought back to Texas after a six-year absence. But the first-year head coach is having as much difficulty as Texas’ 14-year veteran on the men’s side, Rick Barnes.

Basketball is in very bad shape right now. Wednesday’s loss by the women is merely the latest in a long line of failures that have now stained the Texas basketball program. What is the solution? When will this remedy itself? When will a Texas basketball team win a conference game? Furthermore, will either even manage to win a game on the road?

The women have not won a game since before Christmas. The Longhorns last won against Cornell Dec. 20. Basketball season has not been a pleasant one for Texas. Aston coached for years under Texas legend Jody Conradt, and now is the time to show what that experience has produced. It can’t get much worse for the Longhorns, so it’s about time that things started to get better.