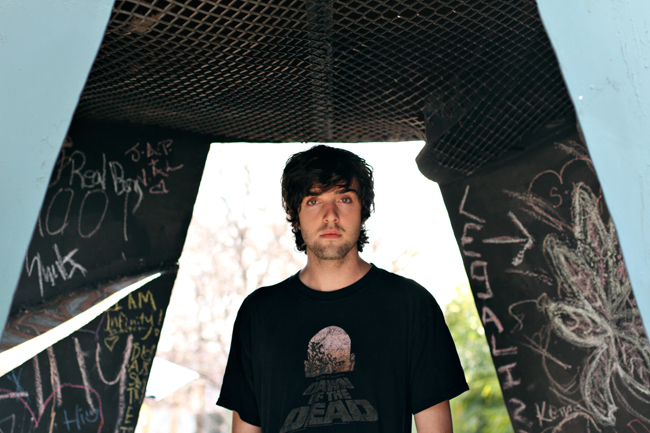 Eric Dingus is a 17-year-old local electronic musician who describes his sound as “ethereal.” Dingus started playing drums when he was 12 and became interested in electronic music when he started high school. " />

Eric Dingus is a 17-year-old local electronic musician who describes his sound as “ethereal.” Dingus started playing drums when he was 12 and became interested in electronic music when he started high school.

Like many 17-year-old boys, Eric Dingus tends to spend a lot of his time tucked away in his South Austin bedroom. Instead of toiling away in front of a gaming device, Dingus sits behind his laptop producing the electronic songs that serve as the platform for his budding career. The Daily Texan sat down with Dingus to discuss the trivialities of being 17 while sitting on the brink of a professional career.

The Daily Texan: When did you first start becoming interested in music?
Eric Dingus: I started drumming when I was, like, 12. The day before I turned 12 is when I had my first drum lesson. My parents were in a band so I always had a lot of music around the house. They don’t play it anymore or anything, but they’ve always been encouraging.

DT: When did you make the transition from drumming to making the electronic music you do now?
Dingus: In ninth grade is when I started, but I started getting really serious about it in the middle of tenth grade. That’s when I got the software I use now, Ableton Live.

DT: How do you produce the music you’re making now? Do you do any sampling?
Dingus: It’s mostly, like, digital. I really like to sample ‘50s vocal jazz music like Ella Fitzgerald and that kind of stuff. It can range from ambient piano music to, like, K-Pop. I try to make the samples unrecognizable; it’s fun and more of a challenge. If you do something completely different with the samples, you’re still making your own music.

DT: How did you get into electronic and rap music? Was this something you always listened to?
Dingus: I got into it in ninth grade. The song “It Was A Good Day” by Ice Cube, I really liked that beat and the song. I realized that not all rap was bad and that’s what I’d thought because I’d just heard stuff on the radio and I didn’t really know much about it. I don’t try to copy any specific genre or sound, really. I just like to see what happens with my own sound. I haven’t tried to hop on any bandwagon.

DT: How would you describe the music you’re making now?
Dingus: Ethereal is sort of a big word I’ve used for a while. I just like to make what I would describe as ethereal dream hip-hop beats. My first serious album was called Ethereal Depression. I just thought it sounded cool.

DT: A lot of the song and album titles are really dark or heavy. Is there a reason behind this?
Dingus: I’ve been on antidepressants since second grade, and it’s definitely played a role in the sound itself. I didn’t really talk to many people at all in school. In the classes, I had a notebook I would just plan music stuff in. The whole mood or everything can be dark I guess, a lot of the themes of the albums or projects and song names are pretty dark. I don’t force it or try to make something that’s extremely dark or depressing.

DT: Do you draw inspiration from your experience with depression? What are your songs generally inspired by?
Dingus: I’m constantly inspired. Music is all I really do unless I’m with friends. I work on music probably at least 6 or 7 hours a day. Basically, every day I wake up really early and walk to the coffee shop because I discovered coffee over the summer and I’m pretty into it and it gets me inspired. I just walk back and forth between my house and the coffeehouse and work on songs. The environment really matters.