Simple bicycle is not so simple 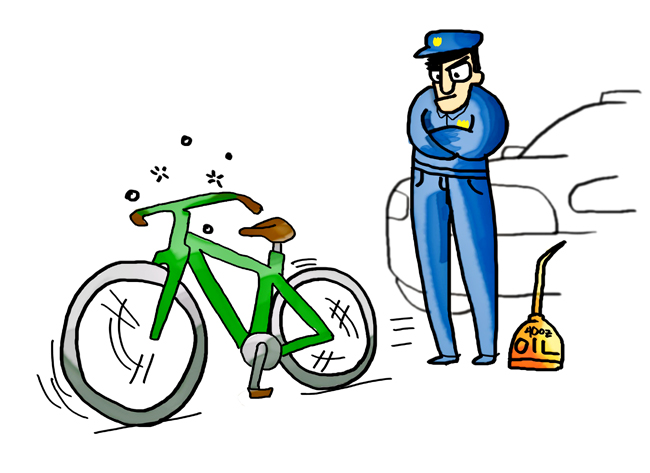 Physicists are known to tackle the big problems: How did the universe originate? What is the nature of matter, energy and time? How can we make the rules that work for very small objects (quantum mechanics) not conflict with those that work for very large ones (general relativity)? However, one doesn’t need to reach for such abstract material to find topics that physicists struggle to understand. In fact, you need look no further than right outside your classroom at the common bicycle.

This seemingly simple device, which has existed in its current form for more than a century, is devilishly complicated and there still isn’t a fully intuitive explanation of how it balances on its two wheels.

What makes the question of the bicycle’s stability so perplexing is that the answer seems immediately obvious. It’s stable because somebody’s steering it, right?

A bicycle remains upright even if the user removes his hands from the handlebars, effectively giving up his ability to steer. In fact, a bicycle doesn’t even need a rider at all: bicycles balance perfectly fine without anybody on them, provided they’re moving fast enough (somewhere between eight and 13 miles per hour — a relaxed speed).

A second explanation may come to mind, for those who have learned some high school physics: the spinning wheels keep the bicycle from falling.

Rotating objects, like the wheels of a bicycle, are stable and the faster they spin, the more stable they become. This gyroscopic effect, as physicists refer to it, explains why tops and yo-yos behave the way they do.

It does not, however, explain the bicycle’s stability. Bicycle wheels are fairly light and don’t generate enough inertia to overcome even a slight tilt. Additionally, while a bicycle can remain stable without a rider, that’s only when traveling forward. Push it backward at similar speeds and it quickly topples over. If the gyroscopic effect were a major contributing factor, this probably wouldn’t happen.

To make sure that this effect wasn’t necessary, a group working out of Cornell University built a bicycle with two additional wheels. These didn’t touch the ground; they merely spun in the opposite direction of the main bicycle wheels, eliminating any gyroscopic effects.

This non-gyroscopic bicycle, which more closely resembles a scooter, remained self-stable. What’s more, once the bicycle was in motion, the experimenters pushed it to the side in an attempt to knock it over. They couldn’t; the bike corrected itself.

Partially through this research, physicists have come up with an explanation for why bicycles don’t tip over: they always turn toward the direction they’re falling. When the bicycle begins to tilt to one side, the front wheel turns in that same direction, which prevents the bike from falling over. This can be verified by locking the handlebars so that the bicycle can’t turn. When you do this and give the bike a push, it topples over.

OK, so this self-stability has to do with the way the bicycle turns in the direction it falls. But why does it do that?

That’s where things get really complicated. Rather than a simple explanation, scientists have developed a formula that determines whether or not a bicycle design will have this essential attribute. Insomuch as it has been tested, the formula works. Unfortunately, it’s not a simple two- or three-variable equation: it requires 25 different characteristics of the bicycle to make a prediction.

So do we know how a bicycle works? Technically, yes. We have an equation that can predict whether or not a particular design will be easy to balance. But that doesn’t mean we fully understand what’s going on and the one-sentence explanation of what keeps it upright only leads to more questions that aren’t so easily answered.

But that’s how physicists earn their living. And if that’s what goes into figuring out the bicycle, it is not too difficult to see why they’re still struggling to understand dark matter.