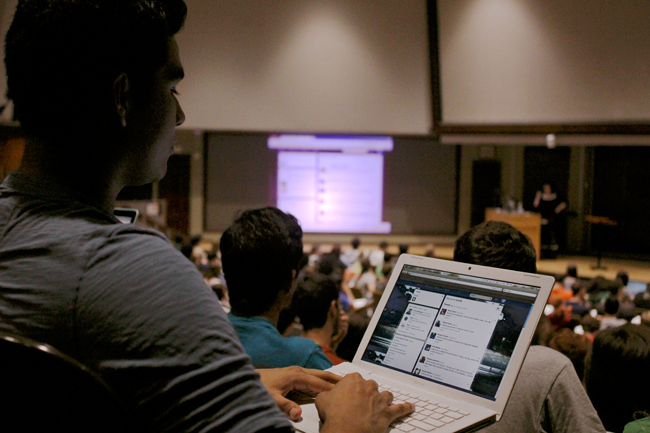 Tweeting in class is normally done discreetly under a notebook or on a cell phone nestled in a crotch — but not anymore for some students.

Associate professors Elizabeth Richmond-Garza, Thomas Garza and Orlando Kelm in the College of Liberal Arts have integrated Twitter into their large lecture classes this semester to enhance student interaction. Select liberal arts courses are being restructured through the Course Transformation Program, which aims to redesign lower-division, large enrollment classes into a more interactive learning environment. Richmond-Garza said a top priority of restructuring classes is implementing technology, including social media, that can improve the course.

“In these huge classes that almost everyone takes, the Department of English has been talking about how to really adapt and optimize what we’re doing, not just in my class but across the board,” Richmond-Garza said. “This is just one of the tools they are considering and how can they use them. They’re right in the middle of that conversation.”

Garza uses a protected Twitter account in his Russian sci-fi in literature and film signature course to review class material with more than 200 students.

Richmond-Garza said Kelm inspired her to introduce Twitter into her courses. Although Twitter is encouraged in her Masterworks of World Literature class, Richmond-Garza said she does not require students to participate. However, students can get participation points by tweeting with the class hashtag in addition to the traditional in-class interactions.

“Some people find it a much less threatening and stressful way to interact,” Richmond-Garza said. “They allow me to know if something is not clear, if something is fascinating and if people are disagreeing.”

“If a student has a question about the lecture or the reading they can simply tweet about it, allowing Professor Richmond-Garza to naturally integrate the answer in a seamless matter with the lecture, not disrupting her flow,” Cotte said. “It is less distracting than if students had to raise our hands and interrupt the lecture by yelling out questions across the large auditorium.”

Theatre Studies sophomore Rebecca Walach said the structure of the world literature class is based on what students are already familiar with, making the class a more comfortable and engaging environment.

“There are more to lectures than a professor barking for fifty minutes, we should be taught the way we learn,” Walach said. “In today’s society we get our information through the media. She looks to find interesting ways to engage her students with music, video and social media.”

Although Twitter is one of several online platforms that can be included in lectures, Richmond-Garza said her colleagues have to find the technology that fits their class. Richmond-Garza said she used the Blackboard blog feature in past semesters, but Twitter suited her lecture style better because it has character limitations and is updated in real-time.

“Blackboard and clickers can be useful, but I haven’t found them to work as well,” Richmond-Garza said. “It should be there to enhance the learning. In smaller classes where you know every student, you might not need something like Twitter.”

Printed on Thursday, January 24, 2013 as: UT courses use Twitter to up student involvement