City may extend ban on smoking to outdoor patios 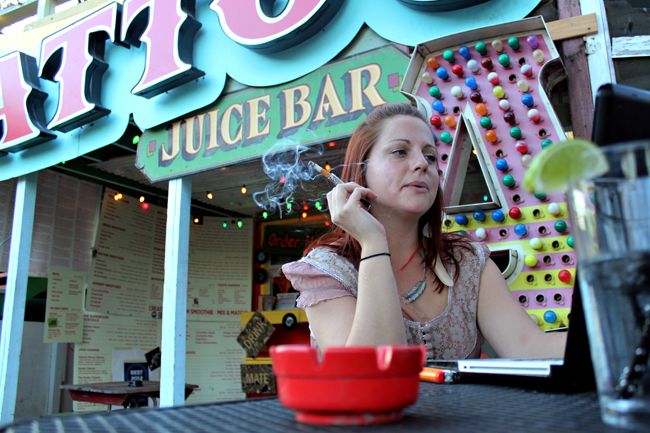 Events Coordinator of Spiderhouse Ballroom Jessica Ryan smokes while working on the patio outside of Spiderhouse Cafe on 29th and Fruth St. Thursday afternoon.

The public areas where smokers can enjoy lighting up may dwindle further as public health advocates fight to clear the air of the dangerous risks of secondhand smoke to Austinites.

The city placed a permanent ban on smoking in city parks in December 2011. Smoke-Free Austin advocacy group, a community group made up of Austin citizens, recently proposed a policy that would further limit smoking throughout the city. The proposal would extend the city’s ban to patios, balconies and other outdoor spaces.

While there is no proposed bill yet, the group is gathering signatures for a policy endorsement statement and is expecting the Travis County Medical Association to back the policy as well, said Jennifer Conroy, founder of Smoke-Free Austin advocacy group.

Conroy said the policy, if passed by the City Council, would benefit the vast majority of Austin’s population.

“We’re accommodating a very small number of people, and that association has harmful risks for people who are exposed to it,” Conroy said. “There are very few occasions when the law would allow us to be exposed to any other class-A carcinogen. Why would we be allowed to be exposed to this and so frequently?”

Conroy said the ultimate goal is to completely eliminate public smoking areas in the city.

“Our effort is to try to prevent people from being exposed to smoke in public spaces,” she said. “We started with smoke-free parks, and it was a logical extension to work on smoke-free patios, which makes sense because people are in much closer proximity to one another on patios.”

“As a smoker, I don’t really believe it’s fair,” Velez said. “You have a right to do with your body as you want. I understand increased taxation to really compensate for increased medical costs that the government might pay later on in life, but straight out banning it isn’t fair.”

“For us at the health department, we just look at data and information,” Huang said. “We also look at the data on the percentage of current smokers, and in Austin and Travis County it’s maybe 15 percent. So you have around 85 percent non-smokers, which is just a growing majority of people who are really bothered by breathing in secondhand smoke.”

Huang said the city park smoking ban passed in 2011 caused several previous opponents of the ban to change their minds because it became easier to quit.

“We have done some surveys of the smokers in Travis County,” Huang said. “Seventy percent of them want to quit, and 59 percent have quit in the last year. A lot of people end up liking [these changes].”

“Personally, I think it’s going to help some people get over their addiction,” Haviland said. “Whether they’re for or against it, I think it’s important for people to voice their opinions on public health issues and let City Council know how they feel.”

Nick Rutland, bartender at The Local Pub & Patio located on Guadalupe Street, said banning smoking in bars is counterintuitive to the reasons people go to bars in the first place.

“Open air is open air, and a bar is also a bar,” Rutland said. “This is where people go where there are vices galore. They are inherently not healthy environments — people are drinking. I think if you want to smoke, a bar patio is the perfect place to do it.”