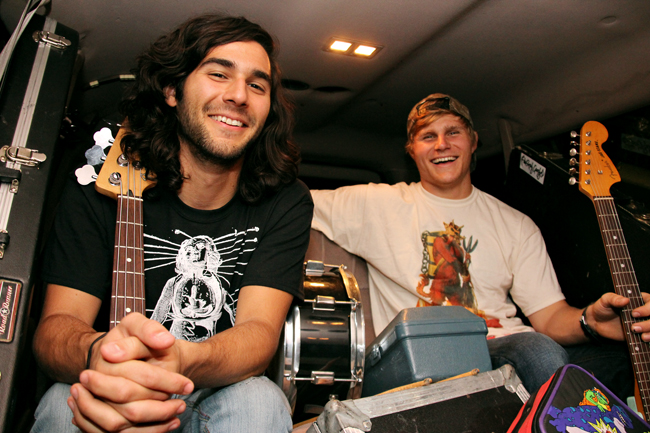 Local punk/hardcore band Fingers Crossed kicked-off a busy year with the release of their first full-length album on New Years Day. Although they formed their roots in Houston, the band has since relocated to Austin.

Fresh out of the studio after recording its first full-length album, punk/hardcore act Fingers Crossed is anticipating a busy year. The quintet, originally from Houston, has relocated to Austin since its start in 2008.

“We finally put our full-length out Jan. 1 of this year, kind of with the idea of starting the year out on a good note,” guitarist Zach Chad said. “We had this idea of 2013 being our year. Getting this album out and then just keeping up the momentum all year.”

Despite being spread out, with three members living in Austin and one living in Houston, the band has a practice schedule that works for them.

“Our drummer lives and works in Houston, which is a challenge sometimes,” bassist Nathan Helton said.

“It takes a lot of jamming with no drums, just playing acoustic in our rooms,” Chad said. “Then, on the day of the shows, we’ll all meet up either here or in Houston, wherever we’re playing, and just rehearse all day. But as far as having a regular practice schedule, it’s kind of rough.”

But the band is used to dealing with obstacles. Fingers Crossed has cycled through several different lineups before settling on the members they have now.

“Andrew [MacLaren] and myself are the two founding members,” Chad said. “We started back in high school, back when we were, like, little kids. We started touring with Nate’s other band, Thieves, and that’s how we met. After that first tour, we lost our drummer and eventually our bassist, and that’s where we picked up Nate.”

Through the band’s relationship with Thieves, Helton eventually came on as its bassist.

“It’s funny, because I had always been basically the official No. 1 fan of Fingers Crossed,” Helton said. “I was always at the shows. And once I found out they needed a new bassist I pretty much made them let me join the band. Since then I split time between the two bands, but since Thieves is kind of in a lull right now I can spend time working on this.”

Fingers Crossed recently returned from tour, which Chad said is the best part of being in the band.

“Our last show was in El Paso, rounding out our two-week West Coast tour,” he said. “I live to tour, I’d do it all the time if I could. I don’t think I’d have the opportunity to see half of the places I’ve seen, like the Hoover Dam, if I wasn’t doing this. It’s a lot of work and yeah, sometimes it’s kind of miserable, but we’re having the time of our lives.”

Helton said the band is excited about its upcoming appearance on “Local Live," its first live performance since releasing its album.

“This album is definitely our best yet,” Helton said. “Whereas a lot of our previous recordings we did in just one or two takes, we put a lot of work into this one. A lot more planning, a lot more cool effects. We’re looking forward to playing the new songs on air. It should be pretty good.”