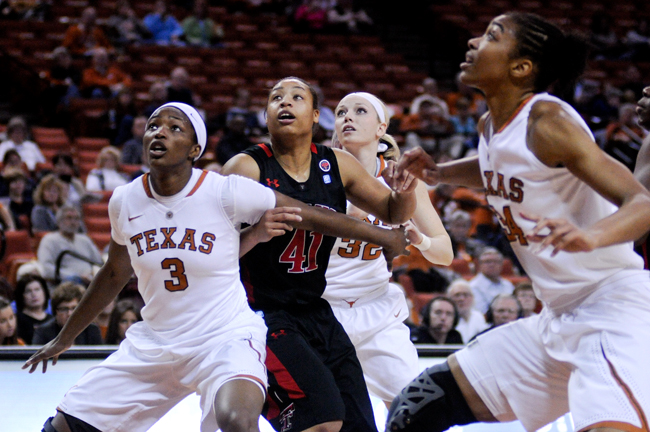 Despite a slow start in Big 12 play, Texas has outrebounded 12 of their 18 opponents. Nneka Enemkpali (left) is averaging a team leading 9.8 rebounds per game. Enkempali is coming off a one-game suspension for a violation of team rules.

After nine straight losses, Texas sits in the basement of the Big 12 standings.

The troubled team comes back home to Austin this weekend as it battles Big 12 foe Kansas State in its eighth conference game of the season. Karen Aston and her Longhorns look to finally bring this losing streak to an end.

The Longhorns will get their two leading scorers back, Nneka Enemkpali and Chassidy Fussell, after they served a one-game suspension during Wednesday’s game against Kansas for violating team rules. They were definitely missed.

Texas struggled to do anything right against the Jayhawks as it was served its seventh straight conference loss. At halftime, the Longhorns had a mere 12 points, their lowest first half output in school history. To make matters worse for Texas, it was outshot and outscored once again in the second half.

Kansas State should be just as tough an opponent, currently holding on to fourth place in the Big 12 with a 12-7 record overall. After losing three straight, the Wildcats came back with two straight wins, including a huge upset of No. 12/11 Oklahoma State.

Brittany Chambers, 2013 All-American candidate, leads the Wildcats. Against the Cowgirls, Chambers had 26 points in one of her best games of the season. The Longhorns already have an eye out for this guard, who is averaging 19.4 points per game.

While Texas has a lot to prepare for against Kansas State, it also has a lot to work on internally, as the team has been extremely inconsistent all year. In their game against the Jayhawks, the Longhorns led in rebounds but shot only 27.3 percent from the field.

Despite a solid first half against Oklahoma, the Sooners came out and took advantage of Longhorn turnovers while taking a small lead into halftime. However, in the second half, they let Oklahoma come out with a 12-5 run and take the game right from under their feet.

Texas has been counting on its young players all season to take leadership. The seven underclassmen, conversely, give the roster a large sense of immaturity and inexperience.

“The people that are taking ownership are really young,” head coach Karen Aston said. “It is hard for them. If they had bad attitudes or if they weren’t trying, I would be very frustrated, but I don’t feel that way.”

These developing leaders aren’t stepping down, however. With 11 games left in the season, the Longhorns still have time left to restore their winning record.

“I think as young players, we measure our success on wins and losses,” sophomore forward Nneka Enemkpali said. “The fact that we had early success in the season and now we are not doing as well, we have to hold each other accountable and uplift each other. That is what I try to do. We just have to move on.”

Published on January 25, 2013 as "Texas needs consistency to end skid".