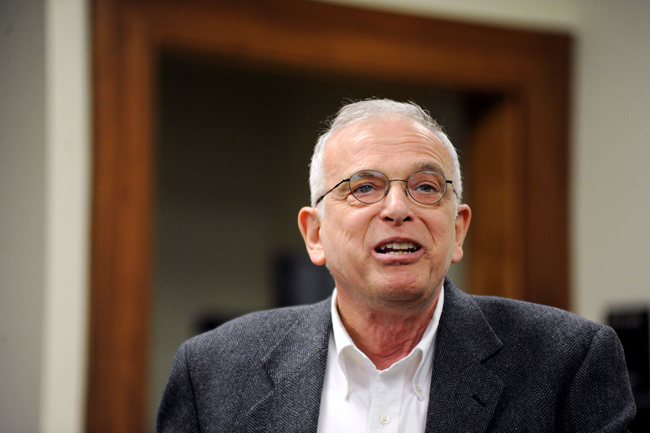 Moshe Rosman presents his lecture, “How Jewish is Jewish History? Jewish Metahistories and the Jewish Historical Experience,” Thursday. Rosman, a Jewish history professor at Bar-Ilan University in Israel, spoke about the validities of traditional Jewish history.

The Schusterman Center for Jewish Studies sponsored a lecture by Rosman titled “How Jewish is Jewish History? Jewish Metahistories and the Jewish Historical Experience.” The lecture featured Rosman’s views on the validities of traditional Jewish history and the metahistories which he describes as “the big story that historians tell.”

“As far as Jewish history is concerned, it has been construed as the quest for a secular Jewish culture, as the process of Jews returning to history and establishing a state, as the triumph over persecution, and many other metahistories,” Rosman said.

Robert Abzug, director of the Schusterman Center for Jewish Studies, said he thought it would be a great idea for people to be exposed to Rosman’s work in Jewish history.

“He speaks clearly of major issues and makes them comprehensible even if you’re not Jewish or a historian, and in ways that are quite applicable to history in general,” Abzug said.

During his lecture, Rosman said the percentage of students studying Jewish studies at Israel’s Tel Aviv University has decreased from 30 percent to 3 percent since the 1970s.

Rosman will give two additional lectures in the following weeks over different topics in Jewish history.

Next Thursday, Rosman will discuss the background behind the construction of a new Jewish history museum in Warsaw, Poland.

“Now all of a sudden, there is a new interest in Poland about Jews and the lecture will cover why this museum all of a sudden and why does this happen?” Abzug said. “The lecture will be about a specifically Jewish topic, but the implications are rather broad for most elements of culture.”

Rosman will lead a third lecture Feb. 14 on the increasing influence of Jewish women in Europe in the early modern period. He said he thinks the general public will be most interested in this topic.

Comparative literature graduate student Rae Wyse said she attended the lecture to see if Rosman would raise questions that could relate to her research on Jewish history in Latin America.

“I work on Jewish studies in Latin America and this question of the history of Jews is very important to me,” Wyse said.

After the first lecture, Wyse said she felt the subjects Rosman covered were very interesting. She said she is hoping the next two lectures will add to her research interests.

“I think the next two lectures will be relevant and interesting to other people as well,” Wyse said.