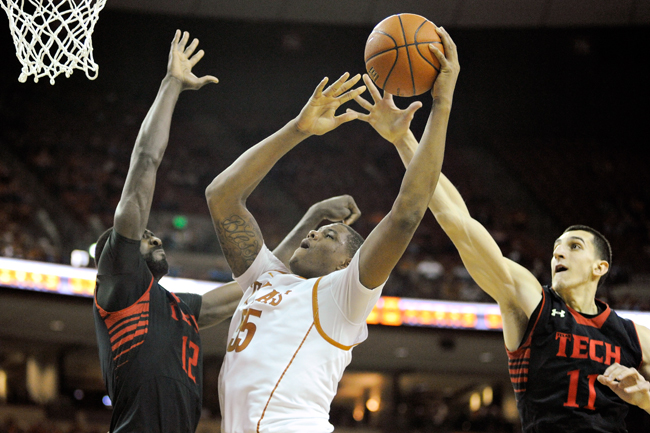 Texas center Cameron Ridley attempts a shot in the Longhorns’ 73-57 victory over Texas Tech where they broke a five-game losing streak and recorded their first conference win of the season. Ridley scored six points, grabbed 10 rebounds and had three blocks.

Texas isn’t out of the dark yet in the Big 12, but it began to creep back into the light with a 73-57 win against Texas Tech over the weekend.

The Longhorns (9-10, 1-5 Big 12), experienced a slow start to the game in which freshman Javan Felix picked up two fouls, relegating him to the bench for much of the first half. In the end, four Longhorns added double-digit scoring totals and as a team held the Red Raiders, 9-9 (2-5 Big 12), to 37 percent shooting from the field. It was just the fourth time this year the Longhorns scored more than 70 points. Texas is 4-1 when it scores 70 or more points.

Julien Lewis saw his role expand as he logged 34 minutes and led the Longhorns with 18 points. The Red Raiders employed a zone defense for a good portion of the game, but Lewis was undeterred by any traps or pressure as he alternated three-point baskets with strong drives through the lane. His accuracy from behind the arc allowed space to open up within a zone, allowing Lewis and other Texas guards to knife their way through the defense and find open teammates.

“The fact is, he is very unselfish and he is trying to get other guys involved, regardless of what we have going on,” head coach Rick Barnes said.

Holland played a big role in establishing the defensive tone for the Longhorns. He and Lewis were anticipating passes with ferocity and the ensuing fast breaks led to a few rim rockers for Texas.

“When the season started, we really worked on extending our defense and getting back to doing a lot of things like that,” Barnes said. “We wanted to create offense with our defense.”

One beneficiary of the Longhorns’ game plan was freshman center Cameron Ridley. Before the half, Ridley had already grabbed nine rebounds and was finding open looks in the paint. He would finish with ten boards to go along with six points.

“We did an excellent job of moving the ball and playing an inside out game by getting the ball inside to Cam,” Lewis said. “He did a really good job making plays and then we started kicking it out and hitting shots.”

Texas scored 38 points in the paint despite playing in its first game without sophomore forward Jonathan Holmes, who is out indefinitely with a broken right hand.

“It was a physical game,” Barnes said. “I would like to see Prince [Ibeh] do more. I thought Jaylen [Bond] did some good things as he continues to play himself back into shape. We have got enough there to compensate for that until we get Holmes back.”