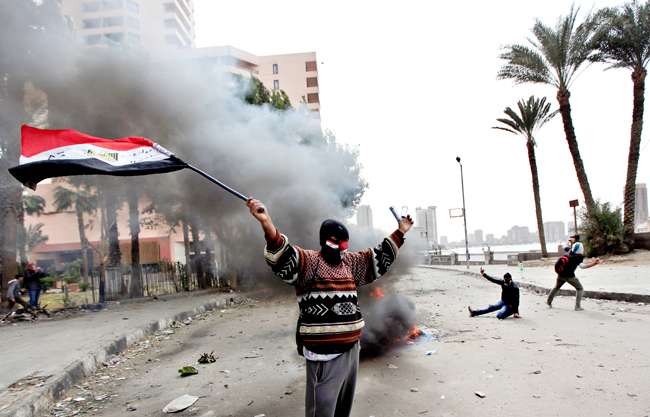 A member part of the Black Bloc holds the Egyptian national flag during clashes with riot police near Tahrir Square, in Cairo, on Monday. " />

A member part of the Black Bloc holds the Egyptian national flag during clashes with riot police near Tahrir Square, in Cairo, on Monday.

CAIRO — Protesters battled police for hours in Cairo on Monday and thousands marched through Egypt’s three Suez Canal cities in direct defiance of a nighttime curfew and state of emergency, handing a blow to the Islamist President Mohammed Morsi’s attempts to contain five days of spiraling political violence.

Nearly 60 people have been killed in the wave of unrest, clashes, rioting and protests that have touched cities across the country but have hit the hardest in the canal cities, where residents have virtually risen up in outright revolt.

The latest death came on Monday in Cairo, where a protester died of gunshot wounds as youths hurling stones battled all day and into the night with police firing tear gas near Qasr el-Nil Bridge, a landmark over the Nile next to major hotels. In nearby Tahrir Square, protesters set fire to a police armored personnel carrier, celebrating as it burned in scenes reminiscent of the 2011 revolution that ousted Hosni Mubarak.

“I will be coming back here every day until the blood of our martyrs is avenged,” said 19-year-old carpenter Islam Nasser, who wore a Guy Fawkes mask as he battled police near Tahrir square.

Angry and at times screaming and wagging his finger, Morsi on Sunday declared a 30-day state of emergency and a nighttime curfew on the three Suez Canal cities of Suez, Ismailiya and Port Said and their provinces of the same names. He said he had instructed the police to deal “firmly and forcefully” with the unrest and threatened to do more if security was not restored.

But when the 9 p.m. to 6 a.m. curfew began Monday evening, crowds marched through the streets of Port Said, beating drums and chanting, “Erhal, erhal,” or “Leave, leave” — a chant that first rang out during the 18-day uprising that toppled Hosni Mubarak in 2011 but is now directed at Morsi.