Five Longhorns count down to the 2013 NFL draft 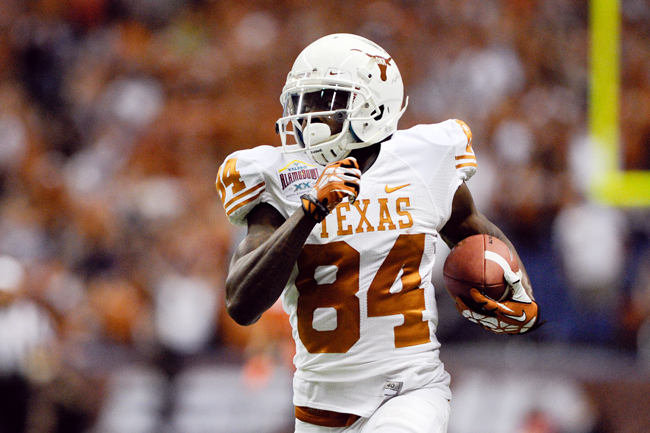 After missing practice time to participate in the 2012 Summer OIympics and enjoying a productive senior season, wide receiver Marquise Goodwin now hopes to be selected in the 2013 NFL Draft. " />

After missing practice time to participate in the 2012 Summer OIympics and enjoying a productive senior season, wide receiver Marquise Goodwin now hopes to be selected in the 2013 NFL Draft.

As Texas football hits the field for spring practices, five former Longhorns begin a new chapter of their own. The waiting game for the NFL Draft.

Pflugerville native Alex Okafor’s power and well-rounded nature could earn him a selection within the first two rounds. Okafor, who made significant contributions to the Longhorns as a freshman, earned All-Big 12 Honors as a junior with 58 tackles, seven sacks and two forced fumbles.

During his senior year Okafor was considered one of the nation’s top defensive ends, leading the Big 12 with .96 sacks per game and effectively snapping Texas’ previous sack record from 1984.

While Okafor isn’t known for speed rushing, his ability to knock opponents down and make use of his hands during plays makes him a competitive prospect in the draft.

After passing on the draft last year in favor of his senior season at Texas, safety Kenny Vaccaro’s productive college career is expected to earn him an early draft selection, perhaps within the first two rounds. He led the team in tackles and was a first team All-America selection by Pro Football Weekly.

Like Okafor, Vaccaro’s impressive freshman season earned him a starting spot the following year. As a junior, he was named to the All-Big 12 First Team. Vaccaro’s steadiness on the field, size and athletic tendencies make him a valuable draft pick.

In addition to awe-inspiring speed, wide receiver Marquise Goodwin’s resume boasts a trip to the 2012 Olympics as a long jumper. Goodwin’s speedy nature allowed him to dart past defenders, while his flexibility and versatility earned him praise from coaches across the nation.

As a junior, Goodwin tallied 94 receptions and 1,024 yards for four touchdowns. But his senior season was considerably less impressive. After missing much of spring practice for the Olympics, Goodwin touched the ball a mere 33 times this year with 13 carries.

Despite his average season, Goodwin’s polished performance in the senior bowl grabbed the eyes of scouts. He is projected to be picked in the fourth round of the draft.

D.J. Monroe, wide receiver and running back, earned an All Big 12 honorable mention this year, although he played a small role in the offense for much of the season, starting just twice.

The fifth-year senior aided his team in the NFLPA Collegiate Bowl, returning the opening kickoff 31 yards and ranking fifth in the conference for kickoff returns. Despite a shining 51-yard run against Baylor as a junior, Monroe’s lack of starts means he probably won’t make the cut for early rounds.

In what was a surprising decision for many, defensive tackle Brandon Moore opted to forgo his senior season in favor of the draft. After playing for a year at Alabama and two at East Mississippi Community College, Moore’s only year at Texas included 11 games of playing time.

While his name rings unfamiliar in fans’ minds, Moore did post solid statistics. In addition to his 18 tackles and two sacks, he was fourth on the team with eight tackles for loss and tied for third with six quarterback pressures.

While some say Moore’s level of production this past year and lack of tapes won’t earn him an early spot in the draft, others note Moore’s size, 6 feet 5 inches and 320 pounds, as an asset to be nabbed in the first three rounds.