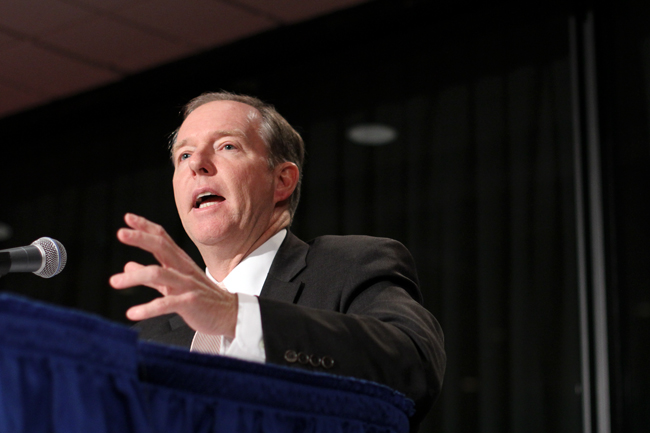 As the national conversation about firearms remains hot following the Sandy Hook Elementary School shooting, UT hosted a panel discussion Monday night about the issues of gun control and the Second Amendment.

“It becomes too simplistic, and I think there is a huge middle ground,” Rodriguez said.

Rodriguez said although the Supreme Court ruled in the 2008 case District of Columbia v. Heller that citizens have a constitutional right to bear arms for self-defense purposes, legislative bodies can place reasonable restrictions on them. He said he proposed that people who wish to buy guns at gun shows be required to pass a background check.

But Sutton said because many people selling at gun shows will not run background checks, this will create a new class of criminal since they will simply go outside to the parking lot to sell. He also said that common knowledge regarding gun control is often wrong.

“The murder rate in Texas is as low as it’s been in recorded Texas history … since the ‘50s,” Sutton said. “The ownership of gun rate has never been higher.”

Rodriguez said people would be hard-pressed to find a direct correlation between more guns and lower crime rate. He said he thinks a low crime rate is more correlated with socioeconomic factors.

Rodriguez said he agrees with President Barack Obama’s proposal to limit the high-capacity clip on rifles to 10 rounds.

Sutton said he disagrees with Obama. He said this would be extremely difficult because in the U.S. today there are probably 100 million 30-round capacity clips. He also said people have rifles with high capacity clips for self-protection.

Another issue discussed at the panel was guns in classrooms. Rodriguez said he is against a bill that would allow guns in the classroom or on college campuses.

He said if someone in a classroom starts shooting and another person tries to shoot him back, once the police department arrives, they will not know who the shooter is.

Dupre said since Sandy Hook he has been speaking to school principals even more in order to understand their views on what the school district can do to continue increasing safety.

“I don’t really believe that gun control has been seriously attempted in this country,” Rodriguez said. “We need to have a serious calm discussion on what reasonable restrictions are.”