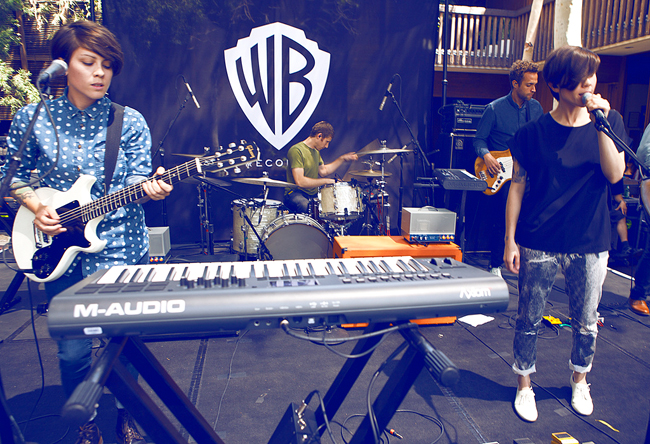 Tegan and Sara perform for Warner Brothers Records in August 2012. The band’s latest album is a continuation of their increasingly pop sound.  " />

Tegan and Sara perform for Warner Brothers Records in August 2012. The band’s latest album is a continuation of their increasingly pop sound.

Tegan and Sara’s latest album, Heartthrob, sees the identtical twin sisters in pop overdrive, trading guitar chord progressions for synthesizer melodies. In the follow-up to 2009’s Sainthood, their former folk pop style is almost nowhere to be found, conforming to the increasing popularity of synth-based pop bands like Chromatics and The Killers.

The best songs are the ones with the least production, like “How Come You Don’t Want Me,” a confessional song that sounds like it could easily fit on Sainthood. There’s no glam rock hook or overbearing pop synthesizers, just honest emotions. “Drove Me Wild” is the best track on the album, a catchy flashback of a former love. However, there are no exceptionally strong outliers that can save the album as a whole.

Tegan and Sara sing in perfect harmony the way only twin sisters can, and it is almost enough to make up for the glittery effects. Heartthrob feels like an appeal to the masses that happened too quickly. There are too many lyrical cliches, like, “The first time I saw your face/I knew I was meant for you,” on “Love They Say.” The ubiquitous synthesizers, drum machines and all-around over-produced soundscapes drown out the talent and emotion. But the goal of the album is not to intimately connect with a listener. The goal is to make them dance, and in that, Heartthrob succeeds.

Beyonce’s talent alone is awe-inspiring, and when combined with Kelly Rowland and Michelle Williams, the result is vocal perfection. Love Songs Destiny’s Child compiles the 13 best Destiny’s Child ballads from the group’s five previous albums, including “Say My Name,” and “Cater 2 U,” while adding one new song, “Nuclear,” which has been met with mixed reviews.

Hatebreed’s seventh album sounds exactly like the rest: angry, cheesy lyrics yelled over heavy distortion and china cymbals banging in the background. The band’s version of metalcore is entirely too formulaic, making it hard to listen to more than three or four songs. Vocalist Jamey Jasta was quoted as saying it’s “all pit, no shit,” and he’s right — this album is only suitable for a long day at the gym.

After 2009’s Gorilla Manor, the expectations were set pretty high for Local Natives. Hummingbird is a continuation of their spacey, laid-back alternative rock with an emphasis on vocal harmonies. Although Hummingbird can be hard to get into and can sound a bit contrived, the slow-moving songs are minimalist works of art featuring incredible lyrics and vocals.