It’s all the Buzz (Mill) 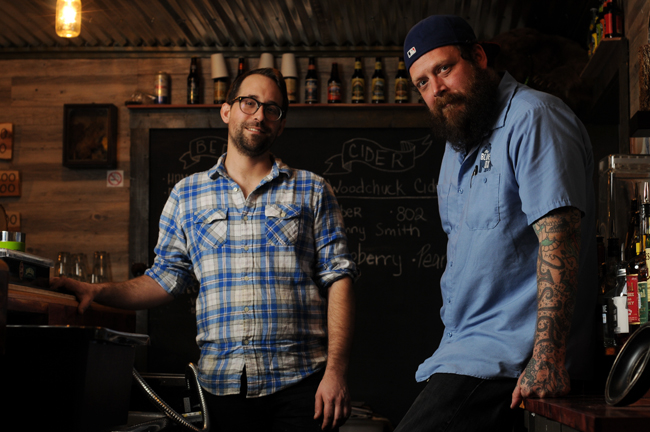 General manager Mitchell Tellstrom and owner Jason Sabala work at The Buzz Mill, a 24-hour coffee shop that opened its doors to the public Saturday, Jan. 19. In addition to coffee, the establishment also serves alcohol, giving the customer a variety of options.

Austin’s insatiable thirst for coffee has brewed another 24-hour provisioner, The Buzz Mill, located on East Riverside Drive. In addition to coffee, the establishment also serves alcohol, allowing the customer to pick whichever buzz they want. On Saturday, Jan. 19, The Buzz Mill opened its doors to the public.

The shop grew from a partnership between two entrepreneurs: Travis Kizer, owner of local coffee roasting and delivery company Bootleg Coffee, and Jason Sabala, manager of Emo’s, which recently opened a location on East Riverside Drive.

“It’s been good so far and we’re growing every day. We’ve had pretty steady bar exposure and we’ve noticed our coffee sales are steadily going up,” Kizer said.

The Buzz Mill’s diverse menu features a host of local products, including imported coffee roasted by Kizer’s company, Owl Tree Roasting; bagels and bagel dogs from Rockstar Bagels and pastries (with vegan options) from Sugar Circus. They have a food trailer in their spacious lumber mill courtyard, Blue Ox BBQ and Pancake Cabin (with no vegan options) that, so far, is only open Friday through Sunday. In the spirit of true lumberjacking, on Sundays from 10 a.m. – 1 p.m. they offer an all-you-can-eat flapjack breakfast.

“It’s all about easily getting a high quality product to a customer without being pretentious. You shouldn’t feel bad because you don’t know coffee the way I do,” Tellstrom said.

It was only a matter of time before an establishment joined the ranks of Bennu Coffee and Epoch Coffee, other 24-hour coffee providers that are often filled with students, even in the early hours of the morning.

“We made that decision because, here’s the thing — if we’re going to be a bar that serves alcohol until two, and a coffee shop that has to open by at least seven, that’s very few hours in between,” Kizer said. “So it just sort of makes a lot of sense to be open 24 hours. There’s a need for
these places,”

According to the 2010 American Community Survey, approximately 6,000 undergraduate students live in the East Riverside area.

“The Riverside area is very up-and-coming and I feel like its an underserved area and needed something like us. There’s so many students that we can cater to,” Kizer said.

What separates The Buzz Mill from other 24 hour contemporaries is their role as a bar. They plan to host rock bands on the weekends. Regardless of The Buzz Mill’s alternating role as a study hub or potential bar hangout, they have already seen hundreds of customers and expect to keep growing.

“Obviously we hope for success, not only as a place to just get coffee but a place for the community to gather,” Kizer said.