Longhorns must capitalize on strong offensive, defensive lines in 2013 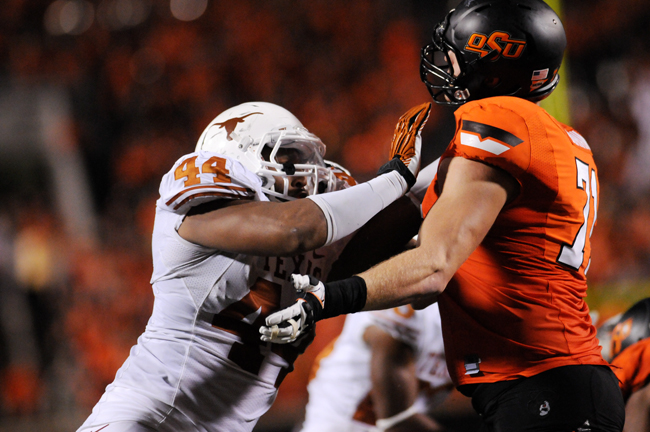 Defensive end Jackson Jeffcoat is among the linemen returning for the 2013 season and will be joined by fellow returning starters as well as new offensive and defensive line recruits.

Alex Okafor made himself a lot of money a month ago.

The 6-foot-4, 265-pound Pflugerville product tossed Oregon State quarterback Cody Vaz around like a rag doll, racking up a whopping 4.5 sacks in a thrilling 31-27 victory. But it was his last game in a Longhorns uniform.

Texas will go into next season without Okafor, its top pass rusher last year. But it’s the only significant blow along the line of scrimmage for the Longhorns, who will have all five starters return next season.

Texas will have three seniors on its starting offensive line and should have two more on the starting defensive line. The Longhorns will have to take advantage of that experience next season because the losses after 2013 will be much bigger than those after 2012.

Okafor’s 4.5 sacks in last month’s Alamo Bowl were outstanding, but he wasn’t the only one getting in the backfield. Desmond Jackson, Cedric Reed and Reggie Wilson all had at least one of Texas’ 10 sacks in the win. And they should all start alongside Jackson Jeffcoat, who missed the majority of last season after suffering a torn pectoral muscle, in the Longhorns’ 2013 season opener, which is a mere 214 days away.

Jeffcoat and Wilson will be seniors next year, along with defensive tackles Ashton Dorsey and Chris Whaley, who should be included in Texas’ two-deep in a few months. Donald Hawkins, Trey Hopkins and Mason Walters — all of whom will have a chance to be selected in the 2014 NFL Draft — will be seniors as well.

When Texas last won a national championship in 2005, eight of the nine starters along the line of scrimmage in the title game were eventually selected in the NFL Draft. Offensive linemen Jonathan Scott, Kasey Studdard, Lyle Sendlein and Justin Blalock have combined to start 220 games in the NFL.

Between Hawkins, Walters, Hopkins, Josh Cochran and Dominic Espinosa, Texas could have multiple future NFL starters as well. But they won’t be around forever. The Longhorns will have to capitalize on that continuity and talent in 2013.

There won’t be any excuse for David Ash and the stable of tailbacks behind him — Malcolm Brown, Johnathan Gray and Joe Bergeron — if they can’t lead Texas to a double-digit win year next season.

Not when they’ll have arguably the Big 12’s best offensive line to work with. Not if Jeffcoat can make it through next season healthy. Because Texas is going to play well enough on the line of scrimmage in 2013 to win the Big 12 and contend for a national championship.