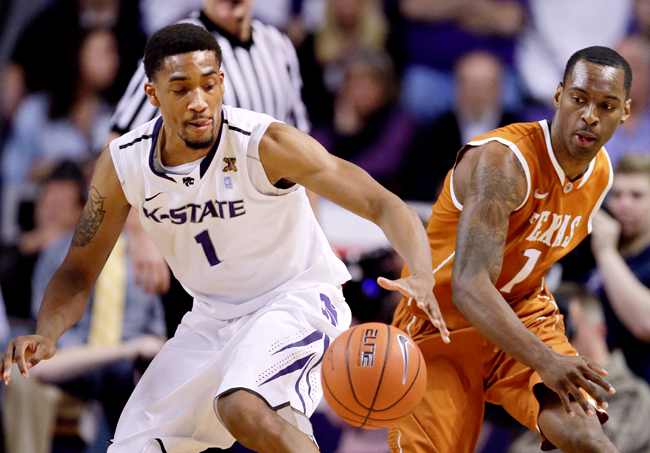 Kansas State guard Shane Southwell reaches for the ball while covered by Texas guard Sheldon McClellan during the first half of in Manhattan, Kan. on Wednesday.

The Longhorns are in the midst of the program’s worst season under head coach Rick Barnes, but they may have reached a new low in their most recent defeat.

Texas has suffered some crushing losses this year, but none were as lopsided as the one No. 18 Kansas State handed it Wednesday night. The Wildcats pummeled the Longhorns 83-57, at Bramlage Coliseum in Manhattan, Kan. It’s Texas’ worst road loss since the inception of the Big 12 in 1996.

“This is a pretty easy one to figure out,” Barnes said. “We were not ready to play right from the beginning, rebound, and is this is what you get. We definitely deserved what we got because we did not do anything right in a lot of ways and they did a lot.”

Iowa State trounced the Longhorns by 20 points earlier this month. Georgetown crushed Texas by 23 while holding it to a Barnes era-worst 41 points. Even Chaminade beat the Longhorns by double digits last November. But, before Wednesday, Texas had not lost by as many as 26 points since a 97-66 loss to top-ranked Duke while wearing black jerseys on Dec. 10, 2005.

Texas (9-11, 1-6) was held to just 19 points in the first half. At the 7:30 mark of the opening half, the Longhorns had nine points and eight turnovers, numbers that were indicative of their dreadful performance Wednesday.

Kansas State (16-4, 5-2) scored 33 points off 18 Texas turnovers while the Longhorns, who scored just eight points off six Wildcats turnovers, did not hit a three-pointer until the 17:42 mark of the second half and committed more than twice as many turnovers (18) as the number of assists they recorded (eight).

“We do not move,” Barnes said. “That is all we have worked on for two to three weeks now. Guys make one or two cuts and good teams will make you get the ball. Our post guys did not do a lot early that we wanted them to.”

Sophomore guard Sheldon McClellan led Texas with 15 points but struggled shooting from the floor once again, making just three of 12 field goal attempts. He is just 5-for-19 (26.3 percent) from the floor in his last two games.

Sophomore forward Jaylen Bond scored 12 points and grabbed a game-high eight rebounds while playing a season-high 21 minutes. Bond’s playing time has been limited since returning from a foot injury that forced him to miss nine games earlier this season, but played well, especially in the second half.

Texas will try to bounce back when it hosts TCU this Saturday.