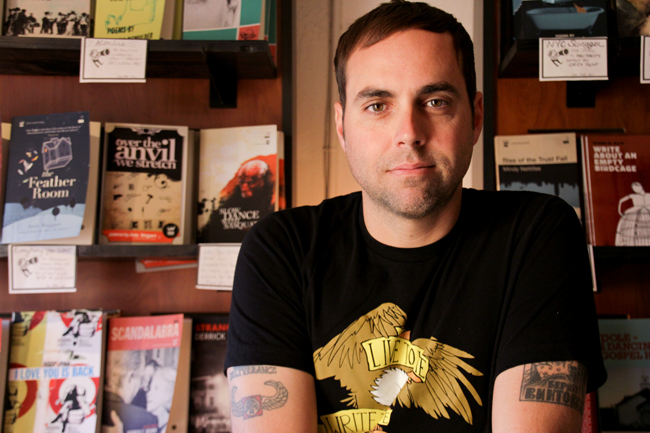 Derrick Brown, former paratrooper for the 82nd Airborne, decided to open Write Bloody publishing house in 2012 as a physical extension of his publishing company. For Brown, the store represents an opportunity to spread his passion for poetry to others throughout the Austin community.

Derrick Brown found poetry in a foxhole at the Fort Bragg, N.C. Army base 20 years ago. He hopes you’ll follow suit at his new store, Write Bloody.

The shop features the work of the poetry publishing company by the same name. Brown launched Write Bloody in 2004 so he could publish his own books after the presses he used folded. The press now features dozens of poets, including internationally beloved authors like Andrea Gibson, Taylor Mali, Anis Mojgani and Buddy Wakefield.

Brown relocated from Long Beach, Calif., to Austin last May and opened his store on Cesar Chavez Street next door to Mexican restaurant Juan In A Million on Dec. 2, 2012.

“It’s a grand experiment for a year to see if a press can open a physical store and survive,” Brown said. “I don’t have anyone to call up and ask for help because no one has done anything like this.”

Write Bloody books are also available online and in stores around the country.

For some people, poetry conjures up vague, ugly memories of dissecting meter in high school English class. But Write Bloody poets are “packing theaters, bars and churches” with folks who want to hear honest, creative verse and powerful stories, Brown said. He requires all the poets he publishes to tour so that they can give live readings and sell their books.

Write Bloody poets pen on topics including hated ex-boyfriends, LGBTQ equality, education and hope. Walk into the store and tell Brown what you want in a poem and he’ll gladly direct you to a book that matches your style.

“I started talking to him and said, ‘I don’t know where to start,’ and he pointed out three of his favorites,” undeclared sophomore Gyles Sonier said. “The store is really close to a lot of students. I hope everyone goes and visits.”

Sonier said he first learned about the store from his coach on the UT speech team, but he’s been reading Write Bloody poets since high school. He said he loves Mike McGee for his charisma on stage and Cristin O’Keefe Aptowicz for her purely brilliant and vulnerable writing.

Aptowicz lives in Austin and helped Brown with the store from day one. She moved to Texas in 2011 after 12 years as a leader in New York City’s slam poetry scene and a stint as writer-in-residence at the University of Pennsylvania.

“We’re a young, friendly, engaging town,” Aptowicz said. “That energy of wanting to engage is represented in the arts scene here, and Write Bloody is a beneficiary in that people are willing to give us a try and they come back and support us.”

She sits on the floor of the Write Bloody store, which isn’t much bigger than the average West Campus apartment living room, and speaks highly of the gray in her hair. Brown, her friend of 15 years, affectionately calls her “Crispy.” The close connection between the poets on the press is crucial to its success — when one poet sells well, it is good for everyone, Brown said.

The store doubles as his office, where Brown almost single-handedly runs the publishing company. He collaborates with artists to produce beautiful cover designs that draw people into the books. In his 40 years, Brown has worked as a paratrooper in the 82nd Airborne, a musician, a magician, a weatherman, a wedding officiant and a winery dirt shoveler. But, he says, “nothing has shaped me more than where poetry has taken me,” and he loves running a business that helps other writers launch and grow their poetry careers.

The best part is “when UPS brings a brand new box of books that no one has ever touched, and I get to cut it open, and I’m filled with the joy of holding it and smelling it and the strange fear of looking for misspellings. It’s like going to bed with someone for the first time, and you’re excited but then you’re also like ‘What if they don’t like my butt?’”

Helping new people enjoy poetry sweetens the deal further, he said. Daniel Lisi is a junior at California State University, Long Beach and works for the company as a manager. He said since reading Write Bloody poetry for the first time three years ago, he has incorporated poetry and literature promotion into his career goals.

“If we can get more people to sit down and write about what they’re going through and convey that to other people, that would build such an important and gorgeous connection with people that I feel is lacking so substantially today,” Lisi said.

Soon, everyone in Austin will have poetry on the brain if Brown has anything to do with it. The press will put out 12 books this year. Brown is organizing regular events and readings to bring together poetry lovers and those who could be.

“People are only used to the poetry they were exposed to in school,” Brown said. “I feel like it’s the ‘50s and people have only heard jazz and the minute they hear some rock ‘n’ roll they’re going to love it. We just need to let them hear it.”