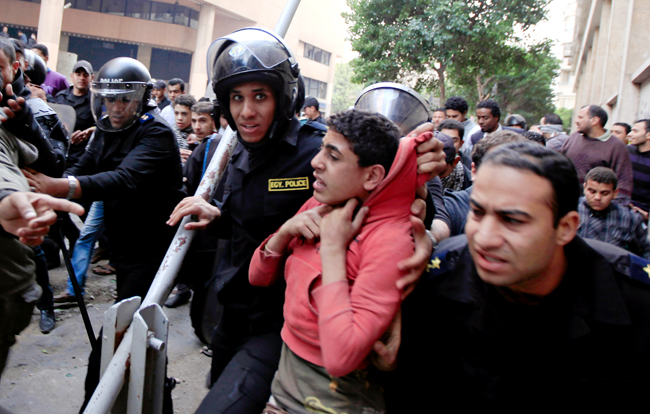 CAIRO — Egypt’s Islamist president has been significantly weakened by a week of violent protests across much of the country, with his popularity eroding, the powerful military implicitly criticizing him and some of his ultraconservative Islamist backers distancing themselves from him.

In his seven months since becoming Egypt’s first freely elected president, Mohammed Morsi has weathered a series of crises. But the liberal opposition is now betting the backlash against him is so severe that he and his Muslim Brotherhood will be forced to change their ways, breaking what critics say is their monopolizing of power.

Critics claim that Morsi’s woes are mostly self-inflicted, calling him overconfident and out of sync with the public. Now the relatively high death toll — around 60 — the spread of protests and the use of excessive force by the police are feeding a wave of anger at the Egyptian leader and the Brotherhood, the Islamist group from which he hails and which is the foundation of his administration.

Morsi did not help matters when he addressed the nation Sunday night in a brief but angry address in which he at times screamed and wagged his finger. In that speech, he slapped a 30-day state of emergency and curfew on three Suez Canal provinces hit the hardest by the violence and vowed to take even harsher measures if peace is not restored.

In response, the three cities defied the president in a rare open rebellion that handed him an embarrassing loss of face.

Thousands in the cities of Port Said, Ismailiya and Suez took to the streets on Monday and Tuesday just as the 9 p.m. curfew went into force. Underlining their contempt for him, they played soccer games, stores stayed open and there were even firework displays — all while troops deployed in Port Said and Suez stood by and watched.

Morsi was forced to back down somewhat and authorized the local governors to ease the measures. All three quickly did on Wednesday, reducing the hours of curfew from nine hours to as short as three.

The main opposition coalition, the National Salvation Front, demands Morsi create a national unity government and rewrite controversial parts of the constitution that the Brotherhood and other Islamists rammed through to approval last month. A broader government, they insist, is the only way to ease the violence and start dealing with Egypt’s mounting woes — particularly, an economy many fear is collapsing.

The liberals gained an unusual ally on Wednesday: one of the main political parties of the ultraconservative Islamist movement known as Salafis, the al-Nour Party, which has usually supported Morsi.

Morsi appears to see no need for concessions. On a quick visit to Germany on Wednesday, he downplayed the significance of the week’s violence.

“What is happening now in Egypt is natural in nations experiencing a shift to democracy,” Morsi told reporters in Berlin.

There is no need to form a unity government, he added, because a new government will be formed after parliament elections — expected in April at the earliest.

Morsi’s reply to critics who demand he widen the circle of decision-making has been to invite opponents to a national dialogue conference to discuss key issues. Almost all opposition parties have refused, calling the conference window-dressing for Brotherhood domination. The conference has held multiple sessions, mainly attended by Morsi’s Islamist allies.

Morsi’s supporters — and some of his aides — accuse the opposition of condoning violence and trying to overturn the democratic results of elections that brought Morsi and the Brotherhood to power.

Meanwhile, anger on the streets is mounting. Politicians may call for a unity government, but a growing bloc of the protesters say Morsi must go outright.