Knebel poised to stand out in closing role 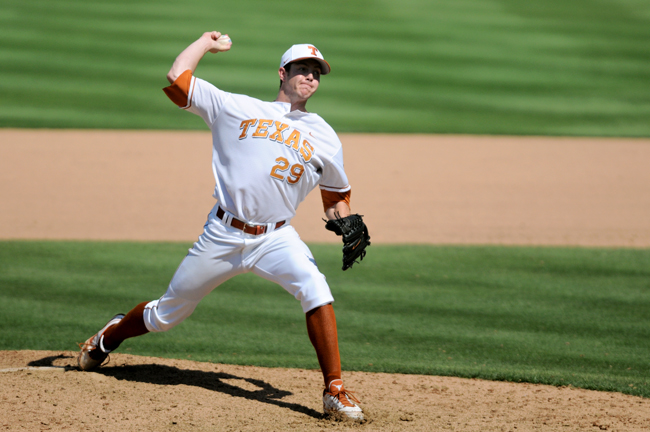 Junior Corey Knebel, whose fastball reaches speeds of up to 97 mph, tied Huston Street's single-season school record with 19 saves as a freshman in 2010. He will continue his role as the team's closer this season. (Daily Texan file photo)

Few players have had as immediate an impact with the Texas Longhorns as closer Corey Knebel did in his first two seasons.

Knebel burst onto the scene as a freshman in 2011, posting a 1.13 ERA and tying the Texas saves record with 19. Behind his dynamic fastball that reaches speeds of 97 mph, he struck out 61 batters in 55 and two-thirds innings on his way to earning Louisville Slugger/Collegiate Baseball and NCBWA Freshman of the Year honors.

The right-hander followed up his standout freshman campaign with an impressive sophomore season last year, as he went 4-5 with a 2.08 ERA and nine saves in 72 and two-thirds innings. Despite making three starts upon a request to move the starting rotation last year, Knebel will return to full-time duty as the Texas closer in 2013, a position where he feels more comfortable and he believes his mentality will be better suited.

“I like going in knowing that I can mess up the game, and I can close the game, so it’s a win or lose situation,” Knebel said. “I like to have the pressure. I feel good with it. Starting is a lot different for me, I’m more relaxed and it’s not what I like.”

Texas head coach Augie Garrido likes the idea of Knebel filling the ninth-inning role, as he believes that a dependable closer gives his team the best chance to win. Early on in the season, Garrido plans on using his starters for five innings before turning the game over to the bullpen, and he is confident Knebel has the skills and the mindset to shut down opponents in the ninth, and sometimes eighth inning, as he has in the past.

“You’ve got to have the right personality and Corey has that,” Garrido said. “Right now he is very comfortable and knows it is in the team’s best interest, which is always his concern, to be the closer.”

The Texas players shared this faith in Knebel, as his track record has given them reason for assurance. The success of the pitching staff will be critical for the Longhorns to win games, and the players feel comfortable turning the ball over to their closer with a late inning lead.

“If we have the lead going into the eighth or the ninth, you shorten the game to seven innings basically because you know that Corey is going to come in and do what he does best and close the door,” junior pitcher Nathan Thornhill said. “He’s nails whenever he’s in that situation and you kind of sit back and relax when you’re at that part of the game.”

The Longhorns know they will have to be able to win close games in order to reach the NCAA Tournament this season, something they didn’t do last season for the first time in 14 years, and right now there is nobody they would rather have on the mound late in the game than Knebel.