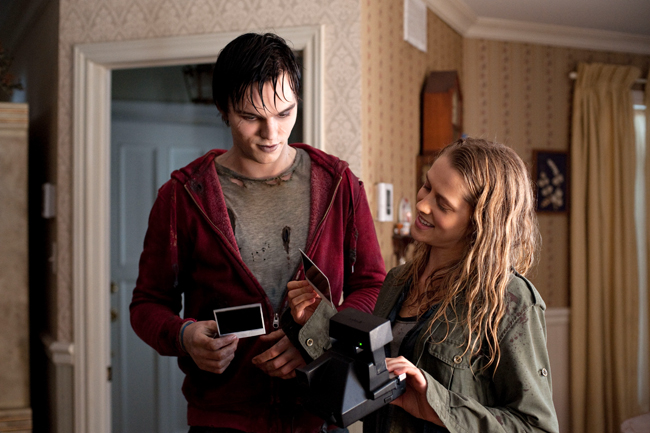 Zombies are perhaps the best of the great monsters of horror cinema. There is just something about a shambling mass of brain-starved monsters that lends itself to great entertainment value in all form of  media. “Warm Bodies,” the new film from director Jonathan Levine, is commendable for doing something that no zombie film has done before — trying to imbue the undead with personalities, and mostly succeeding.

Nicholas Hoult stars as R, a zombie wracked with guilt at his flesh-eating nature. He shambles around an airport, eager to connect with anyone — living or dead. After a particularly gross ,and creative, turn of events, R winds up falling for and sheltering Julie (Teresa Palmer), one of the only humans left on Earth. As R tries to get Julie back to her compound safely, she wonders how she’ll reconcile falling in love with an increasingly animated zombie with her vengeful father (John Malkovich).

In his last film, “50/50,” Jonathan Levine navigated tricky ground, switching between gut-busting laughs and heartrending emotion with grace, and he continues to skillfully walk the tonal tightrope. “Warm Bodies” lives and dies based on the strength of its central concept, and in the wrong director’s hands, the idea of the walking dead being pushed back to the side of the living by true love could have ended up unspeakably goofy or sappy. However, Levine manages to make the film’s central romance undeniably sweet, and there are moments of genuine optimism and beauty to be found in “Warm Bodies.”

The film bursts with creativity and goes for each of its major overtures so earnestly that even when it stumbles, you are inclined to cut it a break. “Warm Bodies” manages to pack in jabs at modern society, one of the most disgusting meet-cutes ever put on film and convincing zombie-on-zombie violence, a rare treat in the genre.

However, the movie’s PG-13 rating makes it impossible for the viewer to be fully satisfied. The film’s bloodshed is mostly offscreen, and besides a few scenes of R scooping unrealistic brains into his mouth, it’s largely toothless. This extends all the way to the film’s villains, CGI zombies who have peeled off their skin, and humanity. While the “bonies,” as R calls them, are threatening in design and good for a few jump scares, they’re ultimately faceless, ineffective villains that fail to instill any real stakes in the film’s inevitable final battle.

Nicholas Hoult has been bouncing around supporting roles for the last decade, starred in two seasons of BBC’s “Skins” and he’s finally gotten to a place where he can carry an entire film on his shoulders. Hoult plays dead convincingly, but as he slowly brings more and more life and humanity into his performance, it becomes clear what a skilled, likable performer he has become.

Teresa Palmer may have the more difficult role, asked to build chemistry with a creature that should by all accounts revolt her, and rising to the challenge admirably. Supporters John Malkovich, Analeigh Tipton and Rob Corddry all bring necessary contrast, conflict and comedy to their roles, and Tipton in particular shines as a normal teenage girl doing her best to be supportive of her best friend’s unconventional romantic pursuits.

“Warm Bodies” is more or less the perfect February film, a lightly romantic take on “Romeo and Juliet” with enough window dressing to satisfy zombie enthusiasts. While its PG-13 rating is a hindrance, it does not take away from the plentiful charm and creativity to be found in Jonathan Levine’s unconventional take on the zombie mythos.