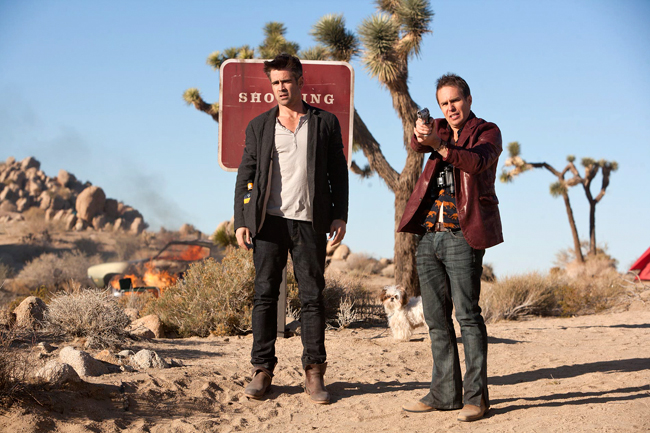 “Seven Psychopaths” is exactly what you would expect out of a film with this kind of title. Martin McDonagh directs and writes this bold new black comedy with sharp dialogue and gritty violence. Yet at the end of the day, “Seven Psychopaths” is more refreshing than similar work by Tarantino or perhaps the Coen Brothers.

“Seven Psychopaths” revolves around Marty (Collin Farrell), a struggling writer who is desperately trying to finish his screenplay, also titled “Seven Psychopaths.” As its narrative progresses, so does the number of times it flirts with cinematic commentary. At this point, he only has the title and is in the middle of listing out who the seven psychopaths are. In response, his best friend Billy (Sam Rockwell) helps him by placing an ad in a newspaper to attract potential characters for Marty’s script. Oh, and Billy is a dog kidnapper who just happened to steal a dog from Charlie (Woody Harrelson), a violent gangster head. What happens next is a psychotic yet consistently entertaining ride.

Unlike plot-based films, “Seven Psychopaths” prioritizes bizarre characters over story. As a result, the main component that shines through is the cast. Farrell gives his most oddly organic performance yet, coming forth as a flawed man, a man with a drinking problem that he never recognizes as a problem and a man with too thin an attention span to work on his script. Christopher Walken, who portrays Billy’s co-worker in dog kidnapping, constantly chuckles at himself while maintaining a fresh presentation, and each of the film’s psychopaths is merely a puzzle piece that forms one big picture.

Although “Seven Psychopaths” constantly pokes fun at its own substance, it still knows that it is indeed a film. McDonagh triumphs from big technical components like pacing and editing to the smallest details like simple camerawork in a scene. Making the camera itself become a character, McDonagh knows when to show and hide things, immersing the audience into the characters’ world effectively. Despite the clever dialogue, there are moments in which “Seven Psychopaths” itself is not clever enough, mainly because it emphasizes giving a ride more than anything else. Yes, it is a noticeable flaw, but then again “Seven Psychopaths” might just become a modern cult hit.

“Seven Psychopaths” is one of the most feel-good films of 2012. With an opening scene in which two violent mob individuals are shot point-blank, McDonagh’s new film confidently tells the audience what kind of tone to expect: odd and bizarre, yet refreshing and highly entertaining. As for the acting department, McDonagh boldly hands the reins over to top-notch actors that everyone loves. Add in over-the-top violence, devious dialogue and a crafty subtlety of comedy, and the result is an explosively rewarding treat from a film that does justice to its title.