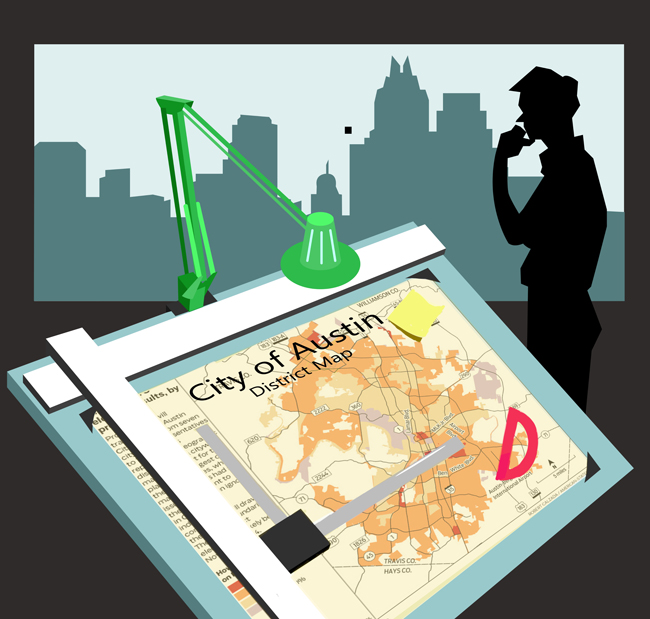 While Austin officials are taking applications from citizens to draw lines for the city’s single-member districts, UT students have an unparalleled opportunity to represent themselves in Austin’s shift to geographic representation.

The Citizens Redistricting Commission will be drawing new district lines for Austin’s 2014 elections. In accordance with the Proposition 3 Amendment passed in November, one council member will represent each of these 10 districts to ensure accurate representation for each resident, said Linda Curtis, coordinator for Austinites for Geographic Representation. The group is responsible for getting the 10-1 plan passed through the City Council.

Curtis said the existence of the student commissioner position was heavily advocated by UT’s student government while the 10-1 plan was being written.

“UT Student Government was very active in the phase of determining what the measure was going to look like, and they advocated that we have a student seat on the 14-person commission,” Curtis said. “The student population in Austin is so big that we got convinced that it was important. I’m hoping that somebody will pick up the mantle from UT.”

Curtis said the coalition began meeting in February 2011 to discuss a process for creating single-member districts.

The Citizens Redistricting Commission will consist of 14 Austin residents, who will be responsible for drawing new district lines for the city. The Applicant Review Panel, an additional three-person entity in the redistricting process, will select the commissioners by narrowing down all applications to a pool of 60 qualified applicants, from which the city auditor will draw eight random names. These eight selected commissioners will appoint the final six commissioners. Applications for both the Applicant Review Panel and the Citizens Redistricting Commission opened Jan. 18 and will close Feb. 22.

“The idea is making sure there is a diverse group of commissioners,” Mory said. “One of the things that we’re focusing on [are] unrepresented groups, for example Hispanics, African-Americans and Asian-Americans.”

Mory said the city auditor’s office has attempted to reach out to UT student organizations, but is unsure if any students have applied.

“I don’t know if we have received any applications as of yet from students,” Mory said. “We’re hoping that we do. The students who meet the other qualifications can also apply to be just a regular commissioner.”

John Lawler, urban studies senior and advocate of Proposition 3, said it is critical for UT’s current Student Government to take responsibility for getting students engaged and interested in applying for the position.

“It’s important for us to get a lot of students to apply for the position,” Lawler said. “If we don’t have anyone applying, and we don’t have our Student Government taking that bold stance, then I think we’re sending the wrong message to local leaders.”