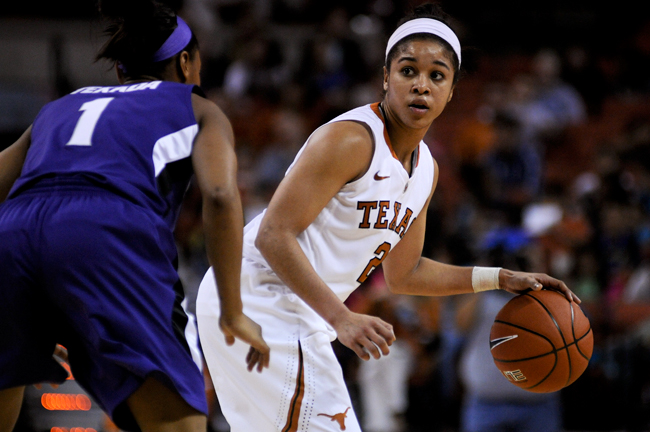 Freshman Celina Rodrigo controls the ball in Texas’ win against Kansas State on Jan. 26. Rodrigo has logged a lot of minutes as of late, posting a career high 33 points against the Wildcats.

In the powerhouse Big 12 conference, momentum is everything. The Longhorns have it.

“We played as a team, we shared the ball really well, team defense was terrific,” head coach Karen Aston said. “There were obviously some really great individual performances, but overall it was a really great team effort.”

Despite their tough start to the conference season, the Longhorn women have been consistently good on the glass, outrebounding 14 of their 19 opponents. In their last outing, the team showed that when they dominate the post, they will likely emerge victorious.

“I thought they were terrific from the very get-go. Establishing themselves in the paint,” Aston said. “They worked harder, longer. They have had games where they worked hard and have done some good things, but this time it was a complete game.”

The Longhorns have also played solid defense all season long, with most of their losses being razor-thin margins. After holding the Wildcats to 24.1 percent shooting, the women are confident that they’ll be able to shut down the Horned Frogs as well.

“We made some mistakes, but didn’t take any plays off,” Aston said. “We were really aware on defense.”

Sophomore Nneka Enemkpali re-established herself as a force to be reckoned with after posting 20 points and 16 rebounds against the Wildcats. Her relentlessness on the boards is almost unparalleled in the Big 12, which should keep the Longhorns in control if she remains consistent.

“I just had a lot of built up excitement and was
really eager to get back out there with my team,” Enemkpali said after the Kansas State game. “The inside play was really on for us and the guards were able to get the ball inside.”

Although the TCU Horned Frogs are still winless in their first season in the Big 12, the Longhorns will not be taking them lightly. TCU’s defense is stout, led by Latricia Lovings, who is third in the NCAA in blocks with three and a half per contest, in addition to her 10.2 rebounds per game.

The Longhorns should look to play a solid in-and-out game like they did against Kansas State, feeding Enemkpali and freshman sensation Imani McGee-Stafford as often as possible to set up perimeter shots.

Defense and rebounding; That’s the key to victory when the Longhorns head to Fort Worth this weekend.