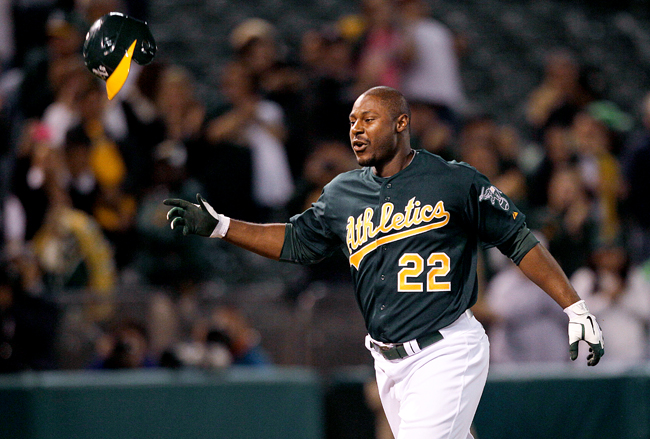 As part of a five-player deal finalized Monday, first baseman Chris Carter (22) along with two minor league players from the Oakland Athletics’ minor league system were traded to the Houston Astros for infielder Jed Lowrie and right-handed pitcher Fernando Rodriguez. The Athletics and Astros will play each other in the AL West following the Astros’ move from the NL Central in  " />

As part of a five-player deal finalized Monday, first baseman Chris Carter (22) along with two minor league players from the Oakland Athletics’ minor league system were traded to the Houston Astros for infielder Jed Lowrie and right-handed pitcher Fernando Rodriguez. The Athletics and Astros will play each other in the AL West following the Astros’ move from the NL Central in

Right-hander Brad Peacock and catcher Max Stassi also went to Houston in the deal between franchises that will be playing in the same division for the first time following the Astros’ move from the NL Central to the AL West in 2013.

Lowrie batted .244 with 16 homers and 42 RBIs in 97 games with Houston, missing two months with ankle and thumb injuries. Despite the limited playing time, Lowrie tied for the fourth most homers among all shortstops last year.

Oakland general manager Billy Beane said he has had interest in Lowrie for years and was glad to be able to get the chance to add him to the roster.

Lowrie played exclusively at shortstop last season but previously played first, second and third base as well during his four years with the Boston Red Sox. The A’s had previously signed Japanese shortstop Hiroyuki Nakajima to a $6.5 million, two-year contract.

Nakajima starts off as the shortstop but Beane said there will be plenty of chances for Lowrie to play all over the infield.

“I feel most comfortable at shortstop,” Lowrie said. “But I’ve played some second base in my career as well. I’m certainly more comfortable up the middle than anywhere else on the diamond. But I’ve had some experience at third base.”

Lowrie, who played his college ball at nearby Stanford, agreed to a $2.4 million salary to avoid arbitration. The Astros are likely to have the lowest payroll in the majors in 2013.

The move sends Lowrie from a rebuilding franchise that had a major league-worst 107 losses last season to a young club coming off a surprising division title in 2012 and one with high hopes for this season.

“Considering everyone had pegged either the Rangers or Angels to win it, it was a great story to watch from a distance,” Lowrie said. “It’s a group of young guys that obviously knows how to win. Hopefully, we’ll just continue to get better.”

Rodriguez went 2-10 with a 5.37 ERA in 71 relief appearances last year. He struck out 78 batters in 70 1-3 innings. Despite the poor record and high ERA, Beane sees plenty to like from the hard-throwing Rodriguez.

“He’s got a real big arm,” Beane said. “His record, his ERA are probably a little bit misleading. He’s another guy to add to our bullpen depth, which was one of our strengths last year. We felt like we were giving them a pretty good package. This addition helped us get over the finish line.”

Carter batted .239 with 16 homers and 39 RBIs in 67 games with Oakland last year, platooning at first base with left-handed hitting Brandon Moss. He provides needed power for the Astros and could thrive at hitter-friendly Minute Maid Park.

Beane said it was difficult to part with a player like Carter who twice won the award as the organization’s top minor leaguer, but he saw little opportunity for Carter to get substantial at-bats with four regular outfielders who would rotate at designated hitter and Brandon Moss likely getting most of the first base at-bats against right-handed pitching.

“Given where this club finished last year and that we have the chance to compete this year we wanted to do whatever we could to help us out right now,” Beane said.

Peacock was acquired by Oakland from Washington in the deal that sent Gio Gonzalez to the Nationals following the 2011 season. After going 15-3 with a 2.39 ERA in the minors in his final year in the Nationals system, Peacock was 12-9 with a 6.01 ERA at Triple-A Sacramento last season. He was ranked as Oakland’s top pitching prospect for 2013 by Baseball America.

“This trade gives us power, pitching and catching,” Astros general manager Jeff Luhnow said in a statement. “Three valuable commodities that will help improve our organization.”