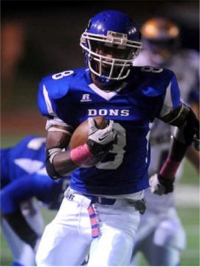 Though they missed out on Dontre Wilson, Monday wasn’t a total recruiting bust for the Longhorns. Earlier in the day, Texas received a verbal commitment from Palo Duro safety/wide receiver Montrel Meander, who flipped his commitment from Washington State to Texas after visiting campus this weekend.

Most schools offered Meander as a safety, but Texas will give him the chance to play wide receiver next year, which seems to have played a major part in his decision.

Texas now has 15 verbal commitments for the 2013 class. The coaching staff hopes to add at least one more before national signing day, which could come from Waco defensive tackle Andrew Billings, who will announce his decision at 3 p.m. Tuesday.