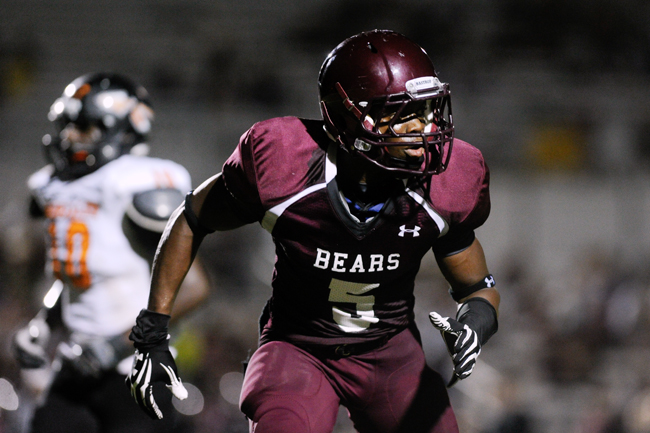 Antwuan Davis, a defensive back from Bastrop High School, is among six defensive recruits currently committed to Texas and one of the most important assets of the 2013 class.

The accolades pile up quickly for Texas’ 2013 defensive recruits.

Of the six who are currently committed to Texas, three of them were U.S. Army All-American Bowl honorees.

One of them made the state semifinals, was first runner-up and won a state title in three varsity seasons.

Another accepted Texas’ grayshirt offer nearly a year ago, turned down full rides from other schools, then finally earned a full scholarship from Texas in December.

For everything they are, however, the 2013 defensive recruits may be remembered more for what they are not.

They are not 6-foot-5, 304 pounds. They do not play defensive tackle. And they are not named A’Shawn Robinson.

Fair or not, Robinson’s decommitment is the story of the 2013 class, and it casts a pall over an otherwise small but promising set of defensive recruits.

This isn’t to say that athlete Chevoski Collins, defensive end Jake Raulerson, outside linebackers Naashon Hughes and Deoundrei Davis, safety Erik Huhn and corner Antwuan Davis lack talent or potential. But without Robinson (who was the most highly-rated member of the class), the task of making people forget about last year’s worst defense in school history becomes that much more difficult.

Ultimately, Robinson’s last decommitment turned what was previously considered to be a strong defensive crop into one which faces more questions than answers.

Take for example the two members of the class who will learn new positions, Collins and Raulerson. Both of them exhibited superior athletic ability in high school, but will take on completely different roles in college.

Collins, a former dual-threat quarterback, will play in the Longhorn secondary. Though there’s a precedent at Texas of converting high school quarterbacks to defensive backs (Adrian Colbert, Quandre Diggs, Adrian Phillips and Josh Turner all saw time under center before they were Longhorns), it’s never guaranteed that a player will thrive at a new position.

The same goes for Raulerson, who will likely move from offensive tackle to the other side of the ball.

“They are trying me out wherever I fit, and they are going to start me out at defensive end and see how I do,” Raulerson said in an April interview with hornsports.com.

Meanwhile, though Collins and Raulerson face uphill transitions, they at least enter their first collegiate seasons without questions about their health.

The same cannot be said for two of their classmates, Huhn and Deoundrei Davis, who both tore an ACL in their senior seasons. Neither injury was career-threatening, and rehabilitation is reportedly going smoothly for both of them. Nonetheless, their recoveries will be important for the long-term trajectory of the class.

The recruit most likely to see the field in his first year besides Deoundrei Davis is Antwuan Davis, who developed into one of the best corner prospects in the country this year. Antwuan Davis showcased his ability in the AAA Bowl, where he blocked a field goal and broke up a pass in the end zone.

“I think Antwuan Davis is a guy that can push for playing time at nickel back or safety,” rivals.com’s national recruiting analyst Mike Farrell said.

Without Robinson, Antwuan Davis becomes the most heralded recruit of the class, a responsibility for which he seems ready.

“I don’t know if I’ll start right away or anything, but I know that I’ll be ready to start if [the coaches] ask me to,” Antwuan Davis told The Daily Texan in September.

Whether that opportunity comes this year or later, it will be here soon.

When it comes, the Texas class of 2013 will have a chance to remind the college football world who it is.

More importantly, the Longhorns will try to make it forget who they are not.