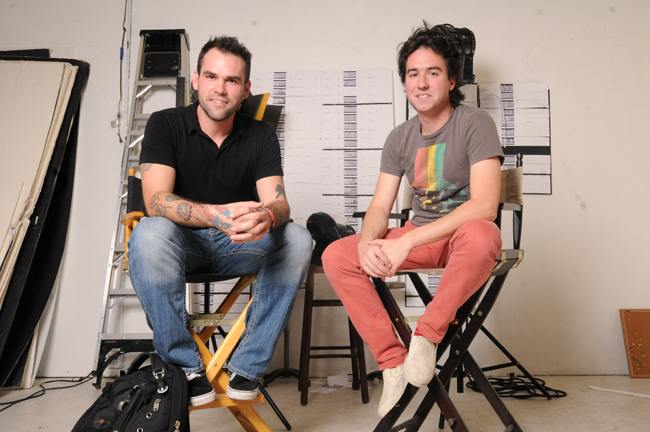 RTF majors Mark Dennis and Ben Foster have begun the pre-production stage of their second feature length film, Enduro. Dennis and Foster are currently filming a pitch trailer to gain the attention of potential talent and investors.

Ben Foster and Mark Dennis were paired together for a short film assignment in 2005. This month, they returned to Austin to begin filming their second feature length film.

As Dennis and Foster join the ranks of successful former UT students such as Robert Rodriguez and Wes Anderson, these rising filmmakers are worth keeping an eye on.

“Our strengths and weaknesses really evened us out to be an effective team,” Dennis said. “I realize that anything I do with Ben is always the best thing I ever do, so this seems like the right path to be on.”

Together, Foster and Dennis produced a handful of shorts and began to build a team of other RTF classmates. The pair made a few extra curricular short films in 2007, but the filmmaking duo had their eyes on making a full-length feature film. Following graduation, Dennis and Foster did just that.

“Mark emailed me three scripts on New Year’s Eve of 2008 and the most compelling and interesting of the three also happened to be the least complete,” Foster said.

“Strings,” the duo’s first feature film, started as a 60-page draft about a musician whose therapist manipulates patients into committing crimes.

Inspired by the story and unfettered by how incomplete the script was, Dennis and Foster jumped into casting and were shooting by March 2008. “Strings” was shot in Austin, San Antonio and New York City for an estimated $65,000. Behind the camera, they added more members to their production team and cast the film using Austin actors only.

After three years of production, the film premiered at the Breckenridge Festival of Film and was screened at over a dozen other prestigious film festivals such as the Hollywood Film Festival and the hometown favorite Austin Film Festival.

“We took home an award at nearly every festival and I think gave our actors and crew something to be really proud of,” Foster said. “Having a successful first film has given us a little clout and I think has really facilitated getting ‘Enduro’ started.”

“Enduro,” the newest effort from Dennis and Foster, tells the story of a young man searching for his girlfriend who has disappeared into a new-age cult. He changes his appearance in order to infiltrate the cult, but the stress of the situation triggers the return of his imaginary friend, whose violent behavior plagued his childhood.

“For ‘Enduro,’ the goal is making people think and feel more. ‘Strings’ set a bar for us with an emotional storyline. I think ‘Enduro’ is going to be even more of a love story than ‘Strings’ was,” returning “Strings” producer Spencer Greenwood said.

Dennis and Foster are currently producing what they are calling a “pitch trailer” for “Enduro.” They are shooting only the elements of the story required to create a trailer. Dennis and Foster plan to use this trailer to pitch the concept and the story to potential talent and investors in Los Angeles.

To produce the “Enduro” pitch trailer, Dennis and Foster have reunited with much of the team from “Strings,” and though they’re now based in Los Angeles, they have returned to Austin to shoot.

“When I think of making a movie in L.A., all I see are obstacles and rules. When I think of Austin, I think ‘I can do anything here and still go to Trudy’s for happy hour,’” Dennis said.

Among the new additions to the Foster/Dennis camp is local actor, Johnny Walter.

“I think with our recent success at festivals like Sundance and South By Southwest this year, Los Angeles and New York can’t not look at Texas as a key player in the film industry,” Walter said. “And I’m lucky enough to be working alongside two brilliant filmmakers from Texas that are doing just that — making a name for themselves on both coasts — while shooting at home.”

Published on February 6, 2013 as "UT alumn return for second movie".