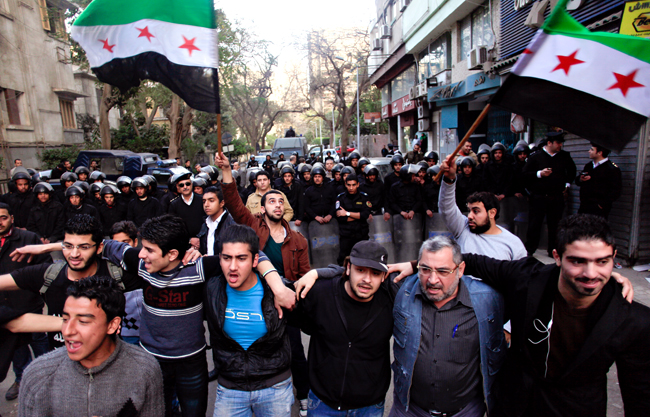 BEIRUT — Syrian rebels and regime forces fought their most intense clashes in weeks inside the heavily guarded capital of Damascus on Wednesday, activists said, with the sounds of shell blasts echoing through the downtown area and keeping many children home from school while residents hid in their houses.

The opposition fighters blasted army checkpoints with rifles and anti-aircraft guns while government forces shelled the eastern and southern suburbs, trying to repel a new insurgent effort to push the civil war into the heart of the capital, the anti-regime activists said.

Although bordered by rebellious suburbs that have seen fierce fighting, widespread clashes have remained mostly on the capital’s edges, saving it from the destruction that has ravaged other major cities such as Aleppo and Homs.

The military of President Bashar has focused on securing the capital, and the dozens of rebels groups that have established footholds in Damascus suburbs have failed to form a united front, each fighting for its own area with little or no coordination with others.

Much of Wednesday’s fighting was sparked by a push by a number of rebel groups in the northwestern neighborhood of Jobar, which is bisected by the Damascus ring road. Rebels, who control the area east of the road, launched attacks on army checkpoints in the regime-controlled western part to try to seize the road, one of the capital’s most important thoroughfares.

They dubbed the operation “The Battle of Armageddon.” It did not appear to be coordinated with rebel groups elsewhere in the city.

Videos posted online showed dozens of rebels collecting in the area with rifles and rocket-propelled grenade launchers as well as rebel attacks on army checkpoints with heavy-caliber machine guns mounted on pickup trucks. Intense gunfire was heard in the background of another video, while local mosques repeatedly broadcast “God is great” as a battle cry.