Poetry group to compete in New York for collegiate championship 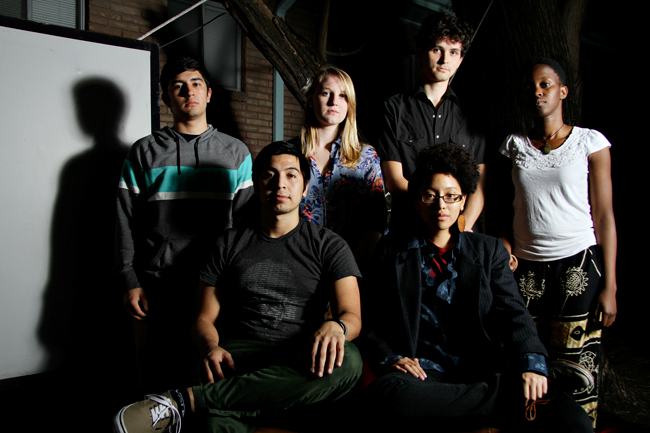 Zachary Caballero and Arianna Brown (front row) are the coaches for Spitshine Poetry’s team that will be traveling to New York this April to compete in the College Unions Poetry Slam Invitational (CUPSI). The team has been practicing three times a week in order to prepare group poems they will present at CUPSI. " />

Zachary Caballero and Arianna Brown (front row) are the coaches for Spitshine Poetry’s team that will be traveling to New York this April to compete in the College Unions Poetry Slam Invitational (CUPSI). The team has been practicing three times a week in order to prepare group poems they will present at CUPSI.

Slam Poetry is the art of bringing written words, pauses and all, to dramatic performance. A slam poet aims to evoke emotion through only the power of their words and the rhythm of their voice. In a slam poetry competition, poets recite original works in multiple rounds, often in dramatic ways. Random members of the audience are asked to act as judges and give numerical scores based on their opinions.

Though Spitshine Poetry has only been around for a year and a half, the group is sending a competitive team of four — advertising junior Robyn Ward, radio-television-film and English senior Elijah Allred, mathematics freshman Loyce Gayo and international relations and global studies freshman Joseph Flores — to New York this April to participate in the College Unions Poetry Slam Invitational.

A surprising amount of preparation goes into a slam competition. In addition to writing, memorization and rehearsal are both key factors in the outcome of a poetry slam round. The Spitshine team has been practicing together three times a week for hours on end. But because CUPSI is team-based, it introduces a whole new dynamic of teamwork and encourages performances of group poems.

History and English junior Zachary Caballero  and sophomore English and Plan I honors major Ariana Brown  founded the group in November 2011 to form a community of writers on campus. Comprised of about 25 members, Spitshine is not limited to slam poetry but also offers workshops and creative feedback for any medium of fiction.

Caballero has been “slamming” since he was 13 and reached the national level at the age of 18. This year, though, Caballero and Brown will not be competing on stage with their teammates at CUPSI.

“I want to be behind the scenes this time around and experience the activity from a different perspective,” Caballero said.

Because Spitshine performs slam poetry as a team, Caballero said that he formed the group to create a community among writers.

“Our goal is to slowly and methodically push writers outside of their comfort zone — outside of their journal or their room,” Caballero said. “We’re all alike. Everyone’s been on the same journey, and it all starts at that one moment where we realize ‘Wow, I have a lot to say, I better write this down.’”

This year, four new poets will have the opportunity to move outside of their comfort zones and slam at the national level.

Allred joined last semester and has been slamming for around six months.

“I started writing plays and stories when I was six or seven,” Allred said, “Now I do slam poetry for the same reason you set a trash can on fire and kick it over — to express yourself and get attention.”

But transitioning poetry to the stage does not come easily for everyone. Ward, another relatively new member, has learned to enjoy slam poetry through Spitshine.

“My first slam was really scary, I was standing in front of all these strangers and was choking at first,” Ward said. “But I feel like it’s made me a better writer, more confident and an all-around better person. It helps me understand myself.”

Spitshine requires no membership fees and hosts free open mics to encourage accessibility for everyone. But travelling to New York can be costly, so they started an online charity drive at Indiegogo.com to raise $4,000, which would cover airfare, a week at a hotel, registration, transportation and food.

They’ll also be hosting a number of fundraiser poetry slams in places other than Austin as well, such as Killeen and College Station. There will be one in Austin on March 5 at the 29th
Street Ballroom.

There’s a lot at stake for the poets. CUPSI will be the first national coaching experience by Caballero and Brown, and the first national competition by Ward, Allred, Gayo and Flores. In this strange intersection of improvisation, acting and writing, poets are asked to lay their hearts in the open to be judged by total strangers.

“It’s so easy to get sucked into,” Caballero said. I know I’ll be doing this for the rest of my life, until my hands fall off because self-expression will never die.”