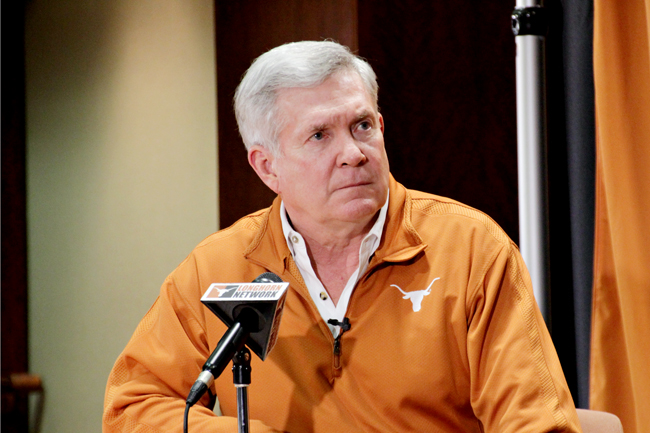 Wednesday, national signing day, was a day high school football players and coaching staffs alike circled on their calendars, the end to the madness that is open recruiting season. When the dust finally settled — sans another decommit — the Longhorns had inked 15 for their class of 2013.

“The fifteen we got are very passionate about being at Texas,” head coach Mack Brown said at his Wednesday press conference. “And that’s what you want. You want people who want to be at your school, and then when somebody decides to back out on you, you’ve got to go look forsomebody else.”

Among them is a defensive back, Bastrop’s Antwuan Davis, who Brown called “one of the fastest in the country,” a trio of wideouts and perhaps a Vince Young doppleganger in Tyrone Swoopes. But for all the flash, it’s the big-uglies up front who have Brown most excited.

“The highlight of this class is the offensive line,” he said. “They average over 6-foot-5 feet tall and 300 pounds and they can all move their feet.”

With a hectic few weeks that included the decommitment of star defensive tackle A’Shawn Robinson and fellow defensive tackle Andrew Billings’s decision to go to Baylor, Brown said he’s still pleased with the batch he’s got at the end of this year’s recruiting process.

“We’ve had some top-ranked signing classes before that didn’t pan out,” Brown said. “We looked at a few that didn’t want to come, but if you look at that it’s happening across the country.  Worry about the ones you get, because you’ve got them for five years, 365 days a year.”

“I think it’s very important for me to have presence in high schools, so I like to go to the schools and see the coach,” he said. “I need to go see those guys and shake their hands and tell them we’re not backing out on kids.”

Those new talents will join a roster of returning 19 starters and other veteran players who are eager to extend their leadership to the newest members of the team.

“The strength of this team are the sophomores and the juniors,” Brown said. “I’m seeing more leadership than I have the last two years.”

He was also quick to point out that there will be ample opportunities for young players to showcase their talents early on.

“All of our jobs are always open,” he said. “We’re going to play all the best players. They’re really getting after each other. There’s more accountability now.”

A core focus is returning to a sharp offense that illuminate the scoreboard in the fall, Brown said.

Despite the hullaballoo that commonly surrounds signing day, Brown cited history as a reminder that what’s to come is much more significant.

“Marquise [Goodwin]  wasn’t talked about on this day, [Alex] Okafor was projected to be a really good football player and nobody even knew who Kenny Vaccaro was,” he said. “Those are our three guys that will probably be drafted the highest [in the NFL.] Today isn’t as important as what happens after today.”

Texas may have officially closed out another recruiting cycle yesterday, but the story isn’t over for the class of 2013. Here’s a quick look at Mack Brown’s group of 15.

“We got some speed that we needed, but the highlight is the offensive line,” coach Mack Brown said at Wednesday’s signing day press conference. Rami Hammad, Kent Perkins, Darius James, Jake Raulerson and Desmond Harrison comprise one of the best offensive line classes in the country. Though they may not all see the field immediately, the 2013 linemen are sure to have left their mark on Texas by the time they’re through.

What was formerly a strength of the class turned into a glaring deficiency once A’Shawn Robinson decommitted. Texas simply did not have enough time to replace Robinson and Waco defensive tackle Andrew Billings poured salt in the wound by picking Baylor on Tuesday. Alhough Brown claimed Wednesday that defensive tackle “wasn’t a position of need,” it still hurts to miss out on such highly-touted prospects.

Besides junior college recruits Geoff Swaim and Desmond Harrison (who will assuredly play right away), wide receiver Jake Oliver, who caught a state-record 308 balls in high school for 4,567 yards receiving and 56 touchdowns, has the best chance of any incoming freshman to see thefield immediately.

Swoopes is a lock to sit out the 2013 season. The Whitewright product needs to become a more polished passer, and with five quarterbacks on the roster, Texas can afford to give him a year just to learn. Swoopes’ only chance to play this year is an injury epidemic or in a gadget package, neither of which are likely. Swoopes should come into the 2014 season ready to compete for the backup job.

When considering the 2013 recruiting cycle in totality, there’s plenty to like, quality-wise. However, one can’t help but wonder what could have been. Five decommitments hurt, but so does losing recruiting battles to Baylor and Texas A&M.

“It’s really important that the guys who commit to us stay committed to us,” Brown said.

In large part, they did. But because of those who didn’t, Brown’s program is at a crossroads. Texas has already jumped out to a historic start for 2014, with seven current high school juniors on board. If on-field success can yield success on the recruiting trail, the Longhorns should have no problem adding to that tally. If not, underwhelming years like 2013 will start to become the rule, and not the exception.

The last time Texas signed a recruiting class this small was in 2005.

Current NFL players Colt McCoy, Jamaal Charles, Quan Cosby and Jermichael Finley were among the 15 players that signed with the Longhorns less than a month after they captured the program’s fourth national title.

That was then, this is now. Texas isn’t coming off a national title. It’s coming off a 9-4 season, having lost 16 games over the past three years. And there’s no McCoy in this year’s 15-member recruiting class. The only quarterback in the class, Tyrone Swoopes, completed just 42 percent of his passes for 1-9 Whitewright last year.

Five guys decommitted from Texas over the past eight months — exactly as many as committed to it during that span. But if you ask Longhorns head coach Mack Brown, his team is better off without them.

“I don’t want anybody here that doesn’t want to be here,” Brown said. “If you’re committed to us, be committed. If you look around, we’ll look around … You want people that want to be at your school. If someone backs out on you, you’ve got to look for somebody else. That’s what happens in this world.”

If you’re searching for what’s wrong with the Longhorns’ recruiting philosophy, you don’t have to look very long anymore. When Sealy receiver Ricky Seals-Jones, one of the nation’s best wideout prospects, decommitted from Texas in June, the Longhorns stopped going after him.

“Texas is very, very picky,” rivals.com national recruiting analyst Mike Farrell said. “They dropped Ricky Seals-Jones. They stopped recruiting him. In past years, that wouldn’t be a concern. But now Texas A&M is the one in the Top 10 and Texas is outside of the Top 10 nationally I think that’s something you wouldn’t have seen a few years ago when Texas was a BCS title contender and things were going really good.”

Texas has let far too many highly touted players slip through its fingers because of misplaced pride and a harmful desire to take only those who are dying to come to the 40 Acres.

It’s why — if Brown doesn’t swallow his pride and start fighting for players that are “looking around” — it will be a while before Texas is nationally relevant again.

“He can run and he’s tough. He’s got great speed…We’re trying to upgrade our speed across the board and he helps us do that,” – Mack Brown

“He is one of the fastest young men in the country…he’s powerful, strong…he could have gone anywhere in America.” – Mack Brown

“He’s tall and he can run… He’s the type of linebacker you want in this league because he can play Sam [strongside linebacker], Mike [middle linebacker], play in space, cover backs and he probably can cover receivers. We feel like he has a chance to be really good.” – Mack Brown

“He’s very, very physical. He got stronger, bigger and is in great shape. You can see here he’s really, really powerful. We were very, very fortunate to find him and find him late and follow his progress.” – Mack Brown

“He’s so athletic and big with long arms. We think he has a chance to be a great tackle at this level, not a good tackle. You see he’s got so much athletic ability. He knocks one down, but he can run downfield and knock another one down. We feel like he can come in and help us immediately.” – Mack Brown

“He can play inside or outside, because of his length with his arms and his speed and the ability to play some safety. He can be in there, instead of your nickel back, because he plays so well in space. There’s no telling how big he can get. He’s a guy that’s got long arms and can really run, very quick.” – Mack Brown

“He’s a guy that’s very, very physical. Has a physical presence in the secondary. He can play up around the line of scrimmage, but he can cover. He’s just a guy that makes some great plays.” – Mack Brown

“Some had him rated the number one center in the country. He’ll probably play guard for us, but he can play all five spots. He can just run and he’s so athletic.” – Mack Brown

“He can run the speed sweeps, big enough to block. He’s a guy that can gain so much more strength in the weight room, but he’s tall and fast.” – Mack Brown

“He has excellent hands, but also really, really fast. He runs great routes. You can tell he’s a coach’s son. He’s a guy that you can move around as a blocker, especially a great catcher in the red zone with his height because he’s really tall.” – Mack Brown

“He has great feet, good package and he blocks with good leverage. We feel like he has a chance to be a special player. He will be a tackle for us and can really run.” – Mack Brown

“He is a guy that played everywhere in high school… He can really run, and he’s very aggressive as you’ll watch him. He’s a very bright young man, very driven.” – Mack Brown

“We wanted a stronger presence at tight end with our blocking…He can run. As we watched him, he’s exactly what we’re looking for to be more physical at the line of scrimmage. I think he’s gotten the other tight ends’ attention with how physical he’s been.” – Mack Brown

“He is a great student… He’s got good speed and good hands. A special teams guy.” – Mack Brown