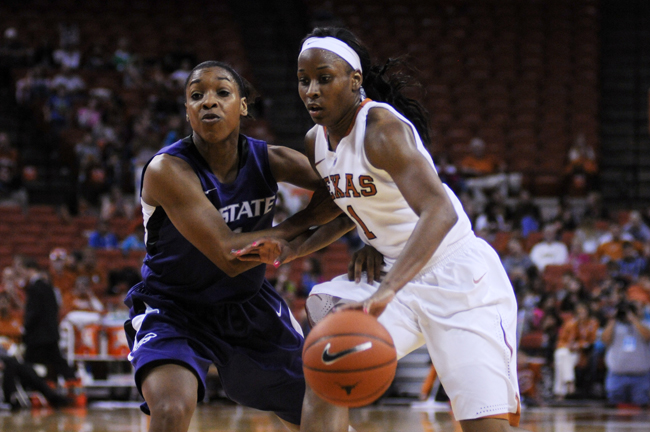 Freshman Empress Davenport handles the ball in Texas’ loss against Iowa State on Wednesday. Davenport led Texas with 13 points and will need to be  sharp against Baylor.

Needless to say, the Longhorns have had their fair share of trouble this season. But as it sits in the cellar of the Big 12, Texas (9-12, 2-8) has yet to face its biggest challenge of the season.

The Longhorns will host the defending national champions Saturday for the first time this season. Baylor (21-1, 11-0) comes into the game ranked No. 1 in the country, in the Big 12 and on a four-game win streak against the Longhorns.

Led by the 6-foot-8 Brittney Griner, the Bears visit Austin holding a record-setting 33-game Big 12 win streak. In their most recent conference victory, they routed Kansas 86-45. Texas lost to Kansas by 38 points.

Griner, who was last season’s AP Player of the Year, is averaging 21.6 points and 7.63 rebounds per game. She leads the Bears in the paint, where she will be a huge presence for her squad.

However, Griner isn’t Baylor’s only threat. Teammate Odyssey Sims is averaging 12.4 points per game and leads her team in steals (51) and assists (105).

The Longhorns, on the other hand, recently got over a nine-game drought where they lost seven straight Big 12 games. After two back-to-back wins against Kansas State and TCU to end its slump, Texas lost its last game to Iowa State, killing any momentum it had.

“I’m disappointed because I thought we would come out and play harder with more intensity,” head coach Karen Aston said about the Longhorns’ most recent loss. “We knew that it was going to be a physical basketball game, and we knew they would have a presence in the paint and they did. I thought there were so many critical plays in the game that really boiled down to that they wanted the ball more than we wanted it.”

The Longhorns still haven’t found a stable way to win. The common excuse of a young, inexperienced team isn’t working anymore for freshman Empress Davenport, who led her squad with 13 points in the last game.

“I think we have played together enough to work together as a team and know what to do and what not to do,” Davenport said.

Saturday’s game against the Bears is the Longhorns’ “Shoot for a Cure” game, which will raise awareness for breast cancer throughout the campus and community.

Published on February 8, 2013 as "Urgency key against Baylor".