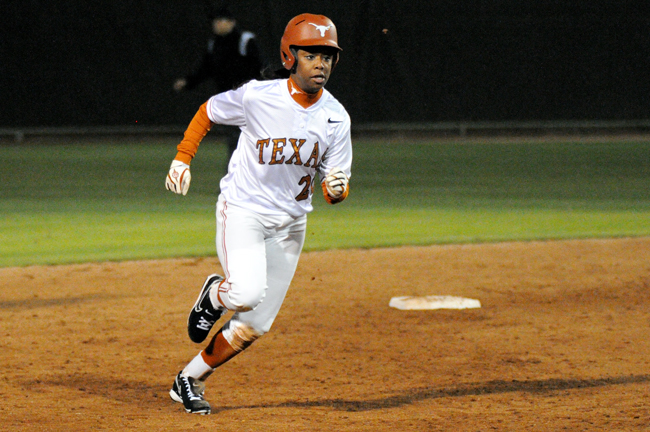 Junior center fielder Brejae Washington rounds second base during a game last season. Washington hit .324 and scored 43 runs last year after stealing a school-record 38 bases as a freshman in 2011. Washington has stolen a school-record 65 bases during her Texas career and believes she can steal 50 bases this year. (Daily Texan file photo)

Brejae Washington’s inside-the-park homerun complimented by misplays and errors by UNT (1-1) propel the No. 9 Longhorns (2-0) to a 9-1 run-rule win, their second of the season and of the Texas Classic.

The second inning was a sloppy one for the Mean Green. After an error and two outs, Stephanie Ceo, in her first career at-bat, came through with another Texas two-out RBI.

Following Ceo, Taylor Hoagland hit a routine grounder to the short. But after a slight bobble, the speedy Hoagland barely beat out the throw extending the inning. With runners on first and third, the Longhorns successfully executed a double steal as Ceo slid safely into home. Quickly, the miscues began to add up, and Washington was ready for the payoff.

The speedster belted a liner over the left fielder’s head. And with Washington’s speed, she rounded the bases easily for an inside-the-park home run.

“I knew the outfield was playing in, so I knew anything in the gap I would at least get a triple,” Washington said. “And then I saw [head coach Connie Clark] waving me home and I was like ‘Oh, I’m going home.’”

Two more runs later, and the Longhorns had broken out a sizable early lead on six unearned runs. This lead helped settle down freshman pitcher Holly Kern in her first career start. She pitched a one-run complete game (just six innings due to the run-rule), recording four strikeouts while walking two and allowing three hits.

Washington also tallied two other singles in a 3-for-4 performance. Hoagland, not her usual self at the plate, found other ways to impress, flashing her speed and glove to make a tremendous play on a high chopper.

As a team the Longhorns had 13 hits and five steals. Only two of the nine Longhorn runs were earned.

Two games into the season, Clark likes what she is seeing, especially on offense.

“What I like is that it is difficult to make a lineup,” Clark said. “We have a lot of good options, and that’s a good problem to have."