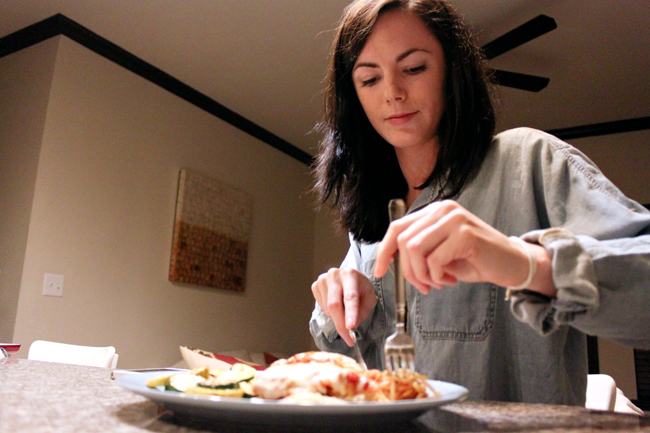 Cynthia Ivey was so sick she accepted she was going to die. That was three years ago.

Ivey, a UT staff ombuds coordinator, lived most of her life in fear of food. She remembers eating potato chips and pickles almost exclusively as a child because she knew they wouldn’t make her sick. Ivey is now 48 years old and only after years of doctor visits, a trip to MD Anderson Cancer Center and even consulting a shaman, was she diagnosed with celiac disease.

“When I got the phone call … I felt it,” Ivey said. “When he said celiac disease, I just knew. It went all the way through me because it was such a big deal. When I found out that I could probably be better in a few weeks I couldn’t believe it. And the pain went away in days. And yeah within a few weeks, I could tell I [was] not going to die.”

The U.S. Department of Health and Human Services describes celiac disease as a genetic immune disorder that affects about one in 133 people. The disease is triggered by ingesting gluten, the protein present in wheat, rye and barley. If someone with celiac disease eats food containing gluten, they may suffer immediately by vomiting or having diarrhea. However, they could remain completely unaware that the protein is wreaking havoc on their small intestine until serious damage is done.

Alessio Fasano, director of the Center for Celiac Research at the University of Maryland School of Medicine, led the landmark study that determined one in 133 people has celiac disease. While scientists have learned more about celiac since Fasano’s study in 2003, the spectrum of gluten sensitivity is not fully understood.

And while the term “gluten-free” may be familiar to many, an understanding of celiac disease is not: Celebrities like Elisabeth Hasselbeck, one of the hosts of “The View,” have done their best to bring attention to the illness. But others, like Oprah Winfrey and Gwyneth Paltrow, who go on gluten-free detox diets, have been part of the gluten-free diet fad. When advertising junior Cara Bessom opens up about her disease, she still receives unbelievable questions.

“Educated college kids will come up to me and be like, ‘So gluten, so it’s a grain? So can you eat a potato?’” Bessom said. “It’s hard because I’ve been so exposed to it, but like prior to being diagnosed, I would have no idea.”

Bessom was diagnosed with celiac disease in 2007, her freshman year of high school. What is already a difficult time for most young people was made increasingly challenging for Bessom.

“Some of my friends’ parents were like, ‘What? What is celiac disease? You didn’t have this yesterday.’ People didn’t understand that it was something that had been going on,” Bessom said.

Since her diagnosis, Bessom’s kitchen at home has two of everything and avoiding contamination is easy. While college proved a challenge at first, Bessom developed a routine.

At home, Bessom eats like anyone else. She begins her day with a piece of gluten-free toast or a bowl of gluten-free yogurt. She cooks rice, vegetables and usually chicken at night. She keeps cookies and gluten-free snacks on hand. And while she has her own pasta strainer and toaster, even Bessom’s roommate “gets it,” and often eats gluten-free food, too.

“I moved off campus my sophomore year and have a wonderful group of friends that are all super accommodating,” Bessom said.

Bessom is just part of the growing gluten-free scene in Austin. The city boasts a slew of restaurants with gluten-free menus, and grocery stores from H-E-B to Whole Foods have aisles devoted to gluten-free items. There are support groups and cooking classes — even the UT dining staff is trained by Lindsay Gaydos, Division of Housing and Food Service dietitian, on how to prepare gluten-free food.

“The biggest battle that I face in terms of training our staff is getting the point across to them that a gluten-free diet is followed for medical reasons,” Gaydos said.

Bessom has been a witness to this battle as she remembers receiving the wrong food during her time living in residence halls. Since moving off campus, she chooses to cook her own food. Bessom said she eats lunch out maybe two times a week and then a couple of times on the weekend.

However, the trendiness of a gluten-free diet has significantly impacted availability of products in stores and restaurants. Packaged Facts, a market research publisher, reported that sales of gluten-free foods reached $4.2 billion in 2012 and are expected to reach $6.6 billion by 2017. Fasano, the celiac researcher, told Reuters that “trend-chasers … account for more than half of the daily consumption of gluten-free products.”

Anne Allen, co-manager of the Austin branch of the Gluten Intolerance Group of Central and South Texas, has been gluten-free for 10 years after being diagnosed with celiac disease. Allen also leads gluten-free tours and cooking classes at Whole Foods.

“Being gluten-free has become kind of trendy, which has helped and hurt those of us who have celiac,” Allen said. “It’s helped because there [are] so many restaurants that are accommodating now. But it hurts because it takes our disease and makes it into a trend where people don’t take it as seriously.”

Many of those dealing with celiac disease do not expect to be able to eat at all restaurants. But if an item is labeled “gluten-free” and is cross-contaminated during preparation, it can be misleading and painful.

Preparing truly gluten-free food requires more than just skipping the croutons on a salad. For those with a serious gluten allergy, gluten found on utensils, preparation surfaces, lids or condiments or in a toaster can cause a reaction. Or sometimes, it can be as easy as a case of mistaken identity.

“Over the holidays I was at my cousin’s house and ate what I thought was a peanut M&M and turned out to be a pretzel M&M. Who knew they even made those?” Bessom said. “It’s a rare occurrence, though. I’m generally very careful. Some people exhibit no symptoms and some with celiac have to lie in bed all day and become seriously ill if they ingest gluten. I’d say I’m somewhere in between the two.”

Wild Wood Bakehouse, just across from Wheatsville Co-op on Guadalupe Street, is a 100 percent gluten-free bakery. Owner Joan Griffith said it’s easy to maintain such a clean environment — they just don’t let anything containing gluten in the door.

“A lot of places have gluten-free items but they’re prepared in environments that if you are really serious about trying to remove all of the fermentative grains from your body, there’s enough wheat in there that you can be contaminated again,” Griffith said.

Local restaurant Galaxy Cafe has had a printed gluten-free menu for three years, said director of operations Amber Santa Cruz. Santa Cruz reported that 5 percent of total sales are gluten-free and that the number of gluten-free orders has tripled since the restaurant introduced the menu.

Santa Cruz said the Galaxy Cafe staff is trained to ask if customers are ordering gluten-free for preference or for medical reasons and that there are still menu items, like fried foods, that they do not offer to celiacs because cross-contamination is unavoidable.

DHFS faces similar obstacles in creating a gluten-free friendly environment: While Gaydos, the UT dietitian, said the staff is trained to use special serving and prep areas for the gluten-free menu items, there is not a specifically gluten-free kitchen.

Jessica Meyer, the blogger behind “ATX Gluten-Free,” was diagnosed with celiac disease in 2009 after years of being sick. Meyer was a nutritionist and somewhat aware of what it meant to be gluten-free, but adjusting was still intimidating.

“I would research places in Austin that had gluten-free menus or maybe frequent nicer restaurants because the chefs were more willing to accommodate,” Meyer said. “I was nervous to ask a bunch of questions, but you really can’t be. Through the process you learn to be assertive when talking to the waitstaff and the chef to make sure you are getting a safe option.”

Meyer also does restaurant consulting, letting restaurants know if they are actually preparing gluten-free meals or not. She shared Allen’s
sentiments that the gluten-free diet fad brings awareness along with misunderstandings.

“At restaurants, people want to add gluten-free options to their menu. Well, that’s great, but they need to do their research,” Meyer said. “They are normally in shock when I tell them, ‘This is gluten-free but you can’t prepare it right here.’ A lot of them will just research what the gluten-free ingredient is, but don’t realize that it might be underneath a different name on the label or something else like that.”

While being a celiac means making major lifestyle changes, there are practices that anyone trying to live a healthy life could consider emulating. Not only does being gluten-free often require eating more whole fruits and vegetables and cooking one’s own food, it also requires research.

“The whole issue is dedicating yourself to finding out what you’re eating,” Griffith said. “We can make better choices and not eat commercial food with every meal. Essentially it’s being able to speak the language of your body … one of the main ways is by knowing what you eat and making your own food.”

But eating gluten-free version of foods like bread and pasta doesn’t necessarily lead to weight loss. Some “gluten-free” foods actually have more calories than their
glutinous counterparts.

“[Being gluten-free] cuts out a lot of processed foods so it does force you to eat a lot more fruits and vegetables,” Gaydos said. “But whenever you are cutting out a lot of the grains you tend to lose things like fiber and B vitamins. Some of your naturally gluten-containing items, whenever they make gluten-free alternatives of them, they usually have a lot of fillers so they end up being much more unhealthy.”

Ivey, Allen, Meyer and Bessom, however, all appreciated the painless eating experiences that gluten-free alternatives brought them. Ivey feels healthier than ever because of her diet.

“I’m so lucky that I got this one. Because [with] most diseases you get sicker and worse. With celiac you can actually get better … I think it’s the best disease a person can have,” Ivey said.

“There’s these Amy’s frozen entrees and on the front it says ‘gluten-free’ and then when you look on the back it says ‘Manufactured in a factory that also processes wheat products.’ So it says it’s gluten-free on the front, but on the back it tells you it’s contaminated,” Ivey said. “We need to have really consistent labeling, period.”

Ultimately, celiac disease or non-celiac gluten sensitivity doesn’t have to mean avoiding restaurants or not enjoying food. It means a different lifestyle — often a healthier lifestyle.

“I wouldn’t change having celiac disease, because I’ve learned so much and it’s taken my life in a completely different direction than I probably would’ve gone if I didn’t have it,” Allen said.

Printed on Monday, Feb. 11, 2013 as: Grain pains: a look at the challenges of celiac disease, gluten-free diets