DHFS to hold cupcake competitions for all student organizations 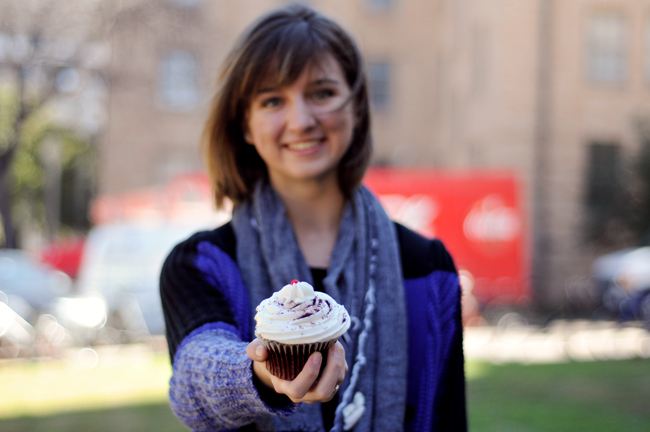 Emily Twa is a contestant in the Cupcake Showdown, a cupcake competition organized by the Division of Housing and Food Service for student organizations. The live cupcake bake-off involves 2 rounds and the winning organization will receive $1000 to donate to the charity of their choice.

Perhaps there is no other baked good that inspires more passion than the cupcake. Cupcake lovers argue over the dominance of red velvet versus Funfetti, buttercream frosting versus chocolate ganache, and even the proper way to eat a cupcake. These conflicting views may come to a tension-filled climax at the University of Texas’ first ever battle royal of baking.

The University of Texas is no stranger to competition. The Longhorns’ academic achievement and athletic prowess are forces to be reckoned with for universities throughout the nation. UT’s Division of Housing and Food Service has decided to use the Texas student competitive spirit in a new forum. It is hosting an event open to all student organizations called the Cupcake Showdown.

The Cupcake Showdown involves two rounds: a video preliminary round and a final live bake-off. The winning organization will receive $1000 to donate to the charity of their choice.

The first round requires each participating organization to make a cupcake that reflects what their group is all about. The groups will make a video explaining their confection and why it is worthy of the cupcake crown. Then they will post the videos to YouTube and send the link to [email protected] by Feb. 18.  After watching each video, DHFS will pick four finalists to compete in a live bake-off Feb. 27 at J2 Dining Hall where a winner will be chosen.

“We serve food to the students and they eat with us, but we want our interaction with the students to be more personal and fun,” Lindsay Gaydos, DHFS dietitian and co-leader of the Cupcake Showdown, said.

Kathy Phan, Gaydos’s partner and marketing coordinator of DHFS, agreed that increased student participation and enthusiasm in DHFS events is the main goal of the competition, the first of its kind offered to student organizations.

Student participation is often an issue for events like the Cupcake Showdown. This is especially true if they involve sitting in a large space, watching amateur students bake for a substantial period of time. Phan and Gaydos have a plan to stimulate the crowd.

“We’re having a food drive at the bake-off, plus a photo booth, cupcake taste testing and a ‘decorate your own cupcake’ activity to make the event more interactive,” Gaydos said.

The final bake-off requires the finalists to use a collection of secret ingredients in their final cakes, all of which are Texas-themed. The possibilities are horrifying to imagine — perhaps jalapenos or Texas BBQ. Although the latter may be mildly ridiculous, DHFS probably has some surprises up their sleeves that would make an Iron Chef cringe.

“We like challenges, so we’re really excited for this,” said Nick Marino, a UT senior and representative baker from student improv troupe Gigglepants. “Our cupcake will probably be vomit-inducing, but it’s going to look great.”

Participating groups represent a diverse cross-section of the UT population, including several nutritional and vegetarian organizations, religious communities, philanthropic sisterhoods and even a few University fraternities.

Emily Twa, a UT freshman, is representing Texas Spirits, a UT spirit and social group, for the competition. If chosen as the champion, Texas Spirits plans to donate the $1000 to either St. Louise House or the Make-A-Wish Foundation.

“I love baking, so this seemed like an easy way to get Spirits involved on campus,” Twa said. “I’ll just have to bring my cutest apron and hope for the best.”

Perhaps this event is not at the intensity and danger level of The Hunger Games, but the combatant nature of UT’s on-campus clubs is sure to come out. It’s time to get out the armory of whisks and wooden spoons, there is a sweet storm brewing and undoubtedly no one will leave hungry.

Published on February 11, 2013 as "Student organizations compete in cupcake challenge".