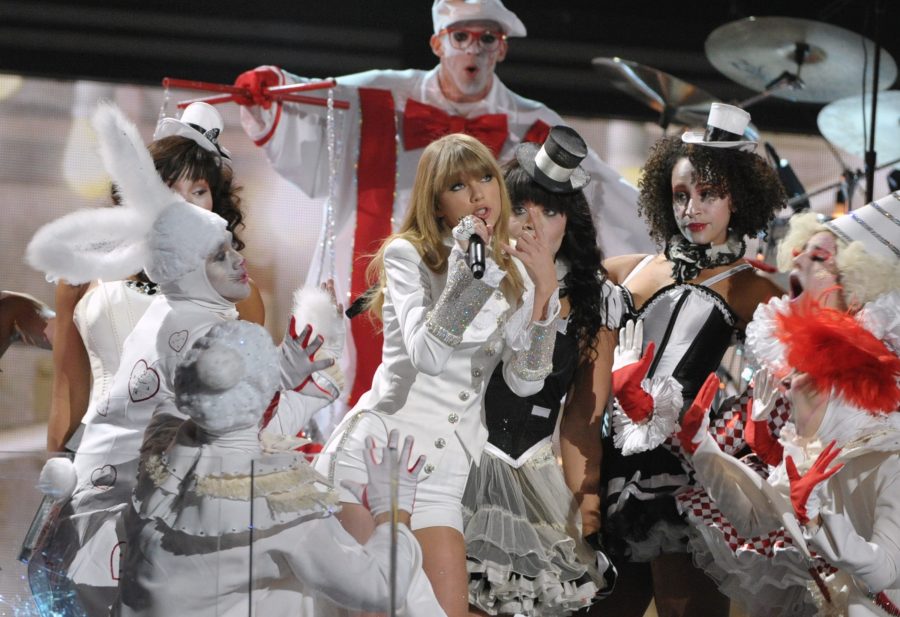 A live recap of what happened at Sunday night's Grammys. Here is everything you missed, and some things you really didn't.

10:30 LL Cool J "does a lil' rapping" with Chuck D, T. Morello, Travis Barker, and Z Trip to close out the Grammys with what appears to be a big light show with some drums and maybe some rapping? There is a D.J. and a guitarist, but they aren't really doing any work. LL Cool J's slow and boring finale to the Grammys seems fitting after a night of musical performances that are barely more memorable than whatever LL Cool J is known for. The producers of the Grammys mix in ads with LL Cool J's performance just to mix things up.

10:11 Frank Ocean is wearing a sweat band to perform "Forrest Gump" with projected legs running beneath him. No one knows what is going on, but whatever it is, it looks really dumb. People run in the background, Ocean wears a yellow blazer and is obviously not running.  The twitterverse though, seems to be into this confusing, slow as Rihanna performance. Frank Ocean waddles away while whistling. And *scene*.

10:08  Elton John's "Your Song" is performed by Juanes to introduce Frank Ocean to perform.

9:57 Now that we've remembered all of the musicians and Sandy Hook, we move into Elton John. He is wearing blue glasses and no one is surprised. T. Bone Burnet, Mavis Staples, the entire band of Mumford and Sons, and Brittany Howard.

9:53 There is now a slideshow of artists who have died in the past year, and whose muscial tastes vary across every type of music imaginable. What is Justin doing? That's what we really want to know. But really all of these people were very talented, and we are sad.

9:48 After a break, we return with a classical song tribute, and then Ryan Seacrest. But all of this is really just to bring on Justin Timberlake again. Everyone is happy, except for Jack White who seems distracted. Timberlake tries to claim the 2013 Grammys are the "Best Grammys Ever." No one cheers.

9:41: THE OSCAR FOR Record of the Year goes to "Somebody that I Used to Know" by Gotye featuring Kimbra. Taylor Swift, who just lost, gives them a standing ovation. Gotye thanks Prince for inspiring him to make music "growing up."

9:40 Prince, who those of us under 40 did not know was still around, arrives on the scene to announce Record of the Year

9:35: To no one's surprise, Hayes was only here to introduce now six time Grammy winner Carrie Underwood who looks like a silver prom queen. Her eyelashes touch her eyebrows, but boy does she have some vocal range. Her dress begins to project shiny florescent blue swirls, and the future has finally arrived. The swirls turn to sparkles and Underwood belts her dress into roses, pieces of gold, and what appear to be jellyfish. No one knows what she is singing because her dress is a butterfly.

9:33 Hunter Hayes, who looks like he tried to get his hair cut like Bieber and failed, joins us for a piano solo complete with early 2000 grunge band black eyeliner.

9:26 Katy Perry looks like a teenage dream with her middle part. After making a cut at Bon Iver, Perry presents the award for Best New Artist to Fun. probably so we can all look at Lena Dunham again. Who knew that dancy pop songs could dominate so many categories! Power couple of the year goes to Dunham and her bf for winning Best Actress at the Golden Globes and Best New Artist respectively.

9:20 The Lumineers yelling was more than worth it to get to JACK WHITE. White looks like he's been in the sun a little bit since his ACL Live appearance in October. He plays "Love Interruption." His duet partner tries to steal the show with her beauty and maple syrup voice. There are no dancers on this stage, only professional musicians. White transfers his skills to the guitar. He sings/headbangs "Freedom at 21." He is everything Rock and Roll can be.

9:18 The Lumineers join us for a brief set. There is some yelling. I'm not sure what it's for, but I think it might be a hipster call.

9:11 BOB MARLEY. All the Marleys tributes dance and sing. Taylor Swift is shown dancing at least as much as the Marleys on stage.

9:10 Rihanna is back again!? Ellen is dancing. Rihanna is at least a foot taller than Bruno Mars, but half as interesting.

9:07 Bruno Mars has what seems like the most high-energy set of the night. He dances. His personality jumps past his dance moves and into the audience, and then all of a sudden STING is there. Adele, Neil Patrick Harris, Taylor Swift, Nicole Kidman are all shown lip synching (or really singing) along.

9:05 A tribute to Bob Marley begins with Bruno Mars

8:57 The award for Best Country Album goes to The Zach Brown Band for "Uncaged"

8:54 Kelly Clarkson comes to the stage still on her winning high and brings the vocal chords that made her an American Idol winner and a favorite belting song of every high school girl since "Miss Independent" was recorded. "You make me feel like a natural woman," Clarkson sings, and we all feel like one when she's on stage with her flowy locks. While she's on stage, she goes ahead with an award.

8:50 Post commerical break, some b-list television star introduces the Black Keys to the stage. The full brass brand in the background complements the flashy lights in the background very well, but no one in this performance of "Lonely Boy" looks lonely. There seem to be 30 people on stage.

8:40 Carley Rae Jepsen looks like a middle schooler with her straight across bangs. She and Ne-yo present the award for Best Rap Song Collaboration  to "No Church in the Wild" by Jay-Z, Kanye West, and Frank Ocean. Beyonce is shown hugging Jay-Z.

8:36 Rihanna appears after being descibed as "one of the bigggest pop stars ever." She sings "Stay," and seems to really be suffering from the dress code as this is the opposite of any of Rihanna's very entertaining (though very risque) dance performances. We will grant her, however, that her voice is *almost* as good as Beyonce's.

8:27 The award for Best Pop Vocal Album goes to "Stronger" by Kelly Clarkson. Lena Dunham is shown looking very upset, but Clarkson hugs everyone and is the first genuinely happy looking winner. Clarkson makes a very funny joke about stories that should be told "after alcohol." Clarkson gives shout-outs to everyone in the audience and wins my heart forever.

8:23 "Girl on Fire" and "Daylight" are performed by Alicia Keys and Maroon Five. Alicia Keys makes everyone forget that Maroon Five still exists by appearing in a semi-transparent dress, playing drums, and singing "Girl on Fire" live. She looks almost as good as her voice sounds. We might call this drumsynching. Keys comes close to breaking the "no breast" dress code of this year's Grammys.

8:20 Dave Grohl and some girl from NCIS appear on stage to announce awards that have been on the internet since this morning, thanking the producers, and presenting Best Rock Performance. The Black Keys win for "Lonely Boy." They are both wearing leather jackets and hold their Grammy like a football. They shout out to Akron, Ohio.

8:18 Justin Timberlake appears in two commercials during the break and snags his own hashtag: #JTGrammys

8:11 The first ever Best Urban Contemporary Album goes to Frank Ocean over Chris Brown's "Fortune" and Miguel's "Kaleidoscope Dream." Ocean tries to make a joke to open his acceptance speech and literally no one laughs.

8:05 Justin Timberlake takes the stage in a bow tie. The video portrayed on CBS turns to a grainy sepia black & white for Timberlake's performance of "Black and White." Timberlake sings live while following choreography. The screen switches back to color for Timberlake to switch to the new "Pusher Girl" premiered last week in New Orleans.  Watching Timberlake work is watching a master: his vocal range is impeccable, his dance moves perfect, and his back up horns enticing.

8:03 Everyone's two favorite people, Beyonce and Ellen Degeneres, appear together to introduce Justin Timberlake to the public. Ellen gets Beyonce to laugh while she is trying to talk. Beyonce demands that everyone stand for Justin's return to the stage.

7:53 Johnny Depp appears looking like he came from a 70's birthday party. He introduces Mumford and Sons who are all wearing black. They play "I Will Wait," and dozens of screeches are heard from the audience. The lighting is golden like the sunshine that their native England rarely recieves, and the 2013 Grammys continue to lack any sort of excitement.

7:50 Faith Hill and Tim McGraw present the award for Song of the Year. It is awarded to "We Are Young" by Fun. Lena Dunham, media darling, is sitting right next to the band and appears to be the only one in the whole audience wearing color.

The band says "I don't know what I was thinking writing the chorus for this song…we are not very young." Taylor Swift is shown applauding above her head. Fun. thanks their families for letting them live at home while they have been young. For the first time, the wrap it up music plays louder and louder.

7:43 Best Country Solo Performance goes to Carrie Underwood for "Blown Away." Her hair is perfectly waved, and she thanks Country Music, the Lord, and "all of her amazing people" for her award and even manages to add a "golly" to her performance.

7:40 The Grammys finally find a voice worth listening to in the R&B singer Miguel, but they make a mistake pairing him with rapper Wiz Khalifa andthe act does little more than segway to Carrie Underwood's award.

7:32 John Meyer appears in a blue velet suit. Miranda Lambert and Dirks Bentley play a slow song with a tree in the background. The slow, melodious Grammys comtinue.

7:30 The band Fun. plays and gets doused in water. It is not that important. They play "Carry On" and continue to be a good-time party band.

7:28 The grammy for Best Solo Performance goes to Adele for "Set Fire to the Rain," a song that most of us have already forgotten about. She managed to best Kelly Clarkson with "Stronger" and the world-wide summer hit "Call Me Maybe" by Carly Rae-Jepsen

7:22 After a lengthy opening monologue from LL Cool J in which zero fun was had and no good jokes were made, the Grammys continues down its no-offense, no fun path with Ed Sheeran singing "The A Team". The momentum and fun of Taylor's pop dies int his set.

7:05 Princess of pop and country alike Taylor Swift takes the stage. She sings her catchy "We Are Never Ever Getting Back Together" in true mad hatter style. Spinning top hat, surrealist swirls, and all. Never has Tay-Swift looked quite so normal.

7:00 The Black Keys kick off the 2013 Grammys with rousing fast start to the album of the year race. The band has already been awarded the award for rock album for "El Camino" and rock song for "Lonely Boy"