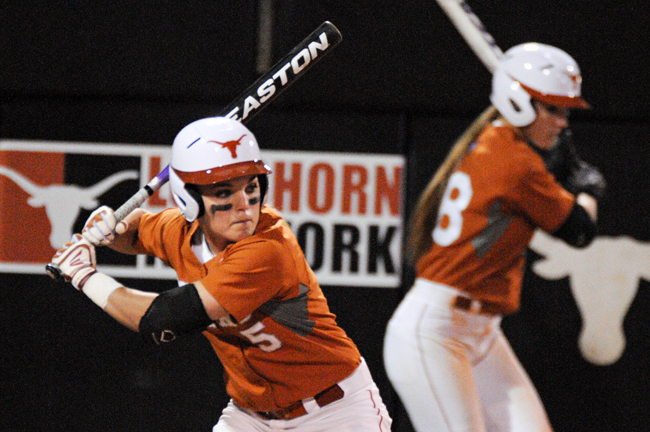 The Longhorns claimed their third straight Texas Classic championship after a 5-4 victory Sunday over North Texas. The team won all five games throughout the weekend, outscoring their opponents 32-5.

“I was pleased,” head coach Connie Clark said of the team’s weekend performance. “We got a lot of different looks. We got all our rookies in and got all four pitchers starts.”

After winning all three pool play games, the Longhorns faced Texas A&M-Corpus Christi in Saturday’s semifinal game. The Islanders collected five more hits against Kim Bruins than they did in the first matchup between the teams, when they were no-hit by Blaire Luna in the Longhorns’ season opener Thursday night. No more runs were scored, however, in this run-rule shutout Bruins also provided the offense with a two-run homer to break the game open.

“It felt great for my first start,” Bruins said. “I just went out looking to hit my spots and hit a line-drive and things worked out.”

The 8-0 win against the Islanders slated them for a rematch with the Mean Green in the championship game. As Blaire Luna, the team’s ace, took to the mound for the first time since the opener, thoughts of a second no-hitter didn’t last long. UNT’s leadoff hitter, Lesley Hirsch, singled to begin the game. Control problems hurt Luna in the first inning as three walks and a wild pitch allowed North Texas to score twice.

“She wasn’t as ready as she needed to be on first pitch,” Clark said. “She rushed her warmup and didn’t do her same routine. She came out of the bullpen and went right on the field.”

After a five-run Texas second inning, powered by Mandy Ogle’s three-run homer and six straight hits, Luna finally found her rhythm as she allowed no hits for the next four innings. But she ran into trouble with two outs in the sixth as the Mean Green cut the Longhorns’ lead to 5-4. A scoreless seventh helped hold the lead Texas took after a five-run second inning, and Luna picked up her second win in as many attempts while recording 14 strikeouts.

“I was just trying to hit my spots and rely on Mandy [Ogle],” Luna said. “I found my rhythm during the game when I was fully warmed [up].”