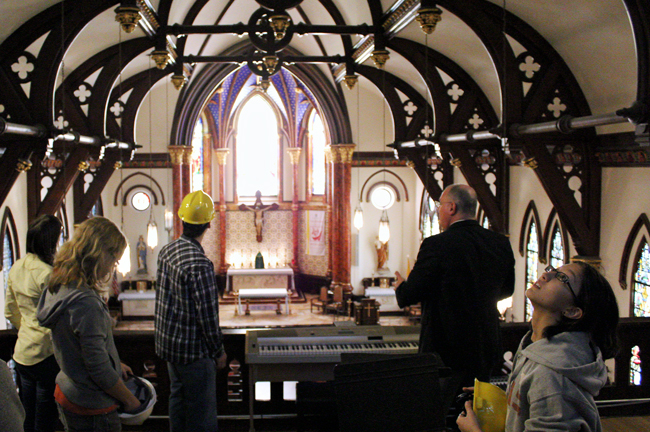 A group of UT engineering students observe as the Rector at St. Mary’s Church in Downtown Austin Fr. Albert Laforet provides an architectural history of the cathedral Friday afternoon.

The cathedral is listed on the National Register of Historic Places and is rare for its manner of construction, which in many places consists of only unreinforced stacked limestone. The construction faces problems the original builders could not have anticipated when the building began construction more than 100 years ago. The cathedral’s rose window has spokes that are completely cracked, and no longer bear weight.

Additionally, parts of the stonework have become cracked from the expansion and contraction of steel rods and moisture within them, and some are no longer anchored to the building. Attention was drawn to the cathedral’s urgent need for renovations when stone began to fall on the sidewalk below in 2011. The renovations began in 2012.

Richard Miscoe, the general contractor for the project, said repairing the building while leaving its appearance unchanged poses an unusual challenge, and he thought UT students could benefit from seeing what is taking place.

“There’s only a finite number of buildings like this left,” Miscoe said. “It’s a rare, unique building.”

As leaders on the project showed students around, they pointed out small changes to the building that had a big impact. Jay Colombo, an architect overseeing renovations said a lightning protection system installed in the 1970s left a 300 pound portion of stone loose on the side of a cathedral tower over a bus stop on Brazos Street.

“The heavy gauge wiring … instead of putting it in a joint, where it can expand and contract and not affect the stone, they actually put it in the stone,” Colombo said.

Wonju Jeong, a civil engineering senior who chairs the Civil, Architectural, and Environmental Engineering Undergraduate Advisory Board, helped arrange the tour and said she found it helpful.

“They went into enough detail that I was able to see what I learned in school,” Jeong said.

Jeong has been on many tours and said she thinks they are important for giving students real life exposure to the concepts they learn in school.

“When I just learned as a freshman, I couldn’t see that in my mind,” Jeong said.

Gilbert Portillo, a civil engineering senior and president of the American Society of Civil Engineers, also said he gained insights from the tour for his interest in construction management.

“Now that engineering has advanced so much, we can actually apply the engineering we learned now to that building,” Portillo said. “They had different people putting this together … and we were able to see how they put all these things together to get this done.”

Published on February 11, 2013 as "Religious innovations".