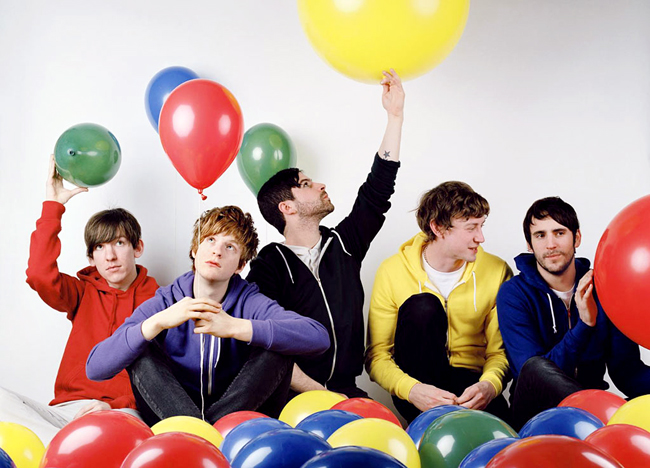 After 2008’s dance-punk album Antidotes and 2010’s relaxed Total Life Forever, Foals could have gone in any direction imaginable, but with Holy Fire it matures into a guitar-driven rock band.

Following a lengthy, atmospheric “Prelude,” the first single, “Inhaler,” begins with a harmonic, delayed Bee Gees riff that makes you want to walk down the street and say hey to everyone. Frontman Yannis Philippakis leads us through a falsetto verse and three measures of a crescendoing pre-chorus before Foals launches into one of the heaviest riffs since Rage Against The Machine’s “Bulls On Parade.” The band’s ability to effortlessly switch between the two types of sounds is both surprising and inspiring, showing Foals’ ability to consolidate its heavier roots off Antidotes with soft rock from Total Life Forever.

“My Number” is the second single and an outlier from the rest of the album. It’s catchy instead of sulky, hiding the bitter sarcasm in Philippakis’ lyrics, “You don’t have my number, we don’t need each other now.”

While the earlier songs make an effort to sound happy, the mood takes a turn toward depression on the centerpiece song “Late Night.” Philippakis convincingly stretches out the words “stay with me” in a chorus that concisely sums up the album. The funk guitar work is minimal, but effective, over a sprawled out, minor key piano chord progression.

It’s obvious that Foals is up to something. Almost every song, besides “Providence,” is well-developed, with particularly inspiring transitions that demonstrate a control over music that could only come after a hit-and-miss process of elimination. There is a delicacy to Holy Fire that sets Foals above other indie contemporaries, and it sounds like it has found a niche somewhere between its infectious choruses and mysterious soundscapes.

Despite its ostentatious title, Songs For Imaginative People, isn’t as exclusionary as it sounds. Darwin Deez presents accessible music that’s easy to relate to, discussing love in the 21st century while incorporating pop culture trends like Skype and online shopping. While the lyrics are on point and the rhythm section is particularly effective, it sounds like Darwin Deez uses the same chords on almost every song, musically undercutting what would otherwise be a slightly above average indie album.

Although Bullet For My Valentine has a few legitimately good parts and arguably a sizable amount of talent, the majority of Temper Temper is filled with hypergeneric non-sequiturs that show an inability to successfully craft a song. Unfortunately, it repeats the same formula for every track: a fast chord progression, a buildup to a breakdown, a cheesy, slow four-chord singing chant and a screeching solo. By the end of Temper Temper, if you can make it that far, you wonder why you didn’t just listen to a Metallica album instead.

Artist: Bullet For My Valentine

Songs to Download: “Livin’ Life (On The Edge Of A Knife)”

The Wonder Years accurately capture the angst of an adolescent coming of age on their reissuing of old 7”s. The Pennsylvania band became a household name in the pop punk scene after 2010’s The Upsides, which was followed by the almost as strong “Suburbia, I’ve Given You All and Now I’m Nothing.” Listening to the older material reveals an impassioned beginning that shows another side of the band (albeit with an unsatisfactory synth player who was thankfully kicked out).

Songs to Download: “Through Two Hearts” “You’re Not Salinger, Get Over It”