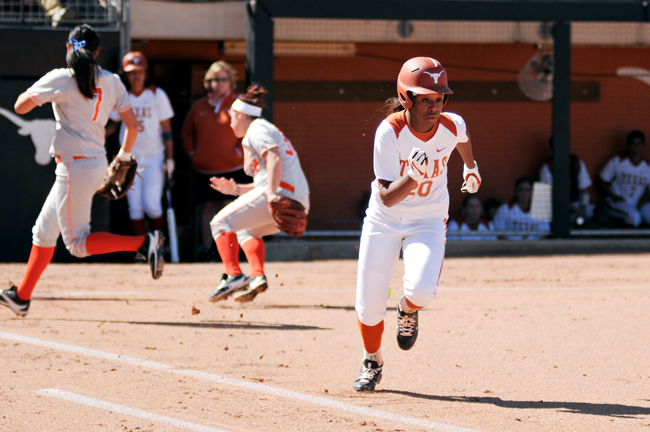 Centerfielder Brejae Washington (20) takes off after laying down a bunt in a recent game. Washington holds both the Texas single-season record in stolen bases with 38 in 2011, and all-time with 65. " />

Centerfielder Brejae Washington (20) takes off after laying down a bunt in a recent game. Washington holds both the Texas single-season record in stolen bases with 38 in 2011, and all-time with 65.

As the story goes, the father of a University of Houston catcher once offered to pay his daughter if she threw out Texas speed demon Brejae Washington. The father would keep his money.

If you can’t tell yet, she’s fast.

“[She] runs at a whole different level,” Longhorns head coach Connie Clark said after Washington signed her letter of intent to play at Texas. “She has tremendous speed. She is the fastest Longhorn we have ever had, and she will put serious pressure on the defense.”

Washington is well aware of her forte and plans her game around it.

But after two stolen bases in two attempts in the Longhorns’ first game against Texas A&M-Corpus Christi, she didn’t run against North Texas. And she had the opportunities to do so after reaching first on two singles.

“I’m focusing on my timing for the delayed steal right now,” Washington said when asked why she wasn’t running after the game.

In her second at-bat the next game, she figured out the timing. After the pitch, the catcher nonchalantly floated the ball back to the pitcher. Before the pitcher even caught the ball, Washington was smiling, standing on second base.

As for the bunting, Washington doesn’t care how far up the corner infielders come.

“Nine times out of 10 they know I’m going to bunt,” Washington said. “It doesn’t matter where they play.”

Washington isn’t just a one-trick pony, however. If the outfield comes in too close she can burn them. With North Texas expecting bunts, the entire defense was pulled in. Washington made them pay, collecting one of the rarest offensive feats in softball, an inside-the-park home run.

Through five games, Washington is batting .500 out of the two-hole while starting each game in center field with no errors.

To compliment her speed, Washington has taken on a new role on the team as a leader.

“From a leadership stand point, Washington, I will tell you, is night and day,” Clark said. “From sophomore to junior year.  To be honest, from fall to spring.”

Clark rewarded Washington for the growth, naming her one of the team’s three captains.

So as the season gets underway, Washington has given herself some lofty goals. She wants at least 50 stolen bases, nearly doubling last year’s total, and believes she can even reach 60.

Her response when she was asked about breaking the all-time DI steals record of 257?

“I think I can do it,” Washington said. “I’m more than capable. I just have to get on base.”