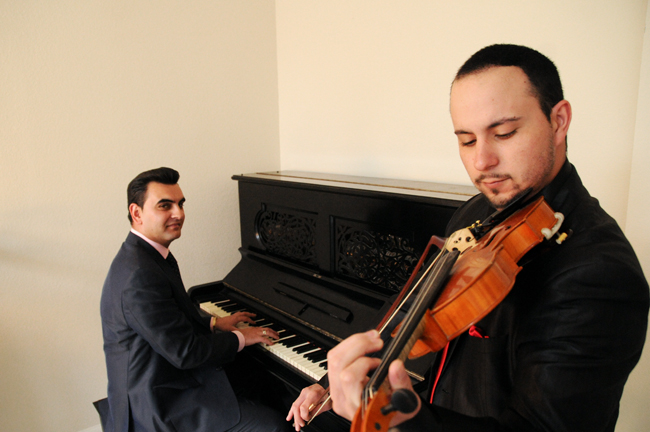 Accomplished violin player David Kovacs and pianist Attila Balogh travel the world aboard cruise ships, performing their mix of classical and traditional European music. Kovacs and Balogh leave for the West Carribean and Europe February 17 as part of their 6th contract with the cruise line.

David Kovacs’ mother tongue is Hungarian, but he’s also proficient in German, Spanish and French. “This is going to be my first interview in English,” he said as he set down his violin.

Combined with pianist Attila Balogh, the two make up Adagio, a classical music duet. They’re the top-rated onboard band of the Holland America Cruise Line and have gone on five “tours of duty,” each lasting four and a half months. Every day they are required to play three to five sets lasting 45 minutes each.

“Sometimes it gets very tiresome because we give our energy and feelings. We play with our hearts,” Kovacs said. “Sometimes we make people cry.”

Both Balogh and Kovacs were born into musical families. Balogh, 27, was born in Miskolc, Hungary and Kovacs, 25, in Szekesfehervar, Hungary, on different sides of Hungary’s capital, Budapest. Balogh began playing the piano at age eight in a family band, and went on to study music at Eotvos Lorand University.

Kovacs began playing the violin at age nine after watching a since forgotten violinist play on television. By the time he was 10-years-old, he was accepted into Franz Liszt Academy of Music, and later toured Europe and China with the Vienna Symphony Orchestra while getting his master’s degree in music.

“If you’re born into a musician family in Hungary its 90 percent sure you’ll be one too, it’s not even really a question,” Kovacs said.

Balogh and Kovacs finally joined forces after a mutual friend expressed a desire to form a Hungarian pop band. At first, they had almost no chemistry.

“When I saw him [for the] first time I was like, ‘Who is this guy? He’s stuck up,’” Kovacs said. “But now we are like twins. We are together for five months every day, in the same cabin.”

Adagio, Italian for slow and relaxed, has over four hundred, mostly classical, songs in its arsenal. It is a necessity for the duet to know songs from different cultures because of their international concert schedule.

“We mix classical, jazz and pop together to try and have our own style and spice up the music a little bit,” Kovacs said. “We don’t really play from music sheets, because we learn a new song and try to make something creative out of it.”

Adagio cites Roby Lakatos and Michel Petrucciani as its favorite artists, but the musicians are big fans of American music as well.

They’ve been staying in Austin with a few friends, but on Feb. 17 they are leaving for their sixth contract, this time in the West Caribbean and then to Europe. Their future is uncertain, but they know they are ready to settle down.

“After this contract we don’t want to do it again. We want to be guest entertainers where you only have to play three shows a week and then you don’t have to stay on the ship,” Kovacs said. “Or get a contract on land. We want to move here. We love Austin, there’s so much music and good musicians.”