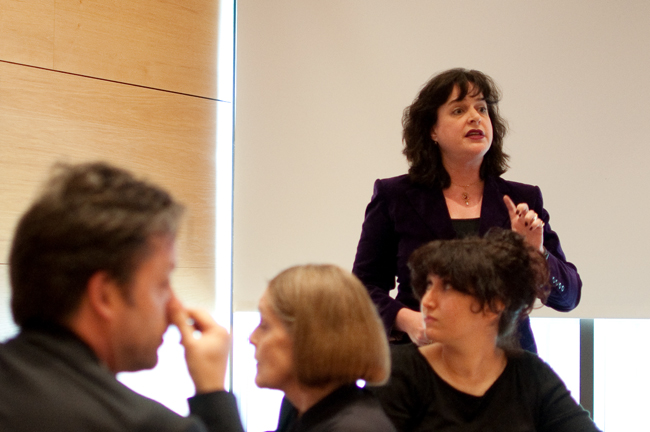 Professor Elizabeth Richmond-Garza presents her analysis of Oscar Wilde during a roundtable discussion of the Harry Ransom Center’s Oscar Wilde archive Tuesday afternoon. A second prequel to “The Oscar Wilde Archive” will be open to the public on March 19.

A roundtable discussion about Oscar Wilde’s life and work was held Tuesday at the Harry Ransom Center, which houses the Wilde archives. The event was hosted by the Ethnic and Third-World specialization of the graduate program at the Department of English.

The talk, “The Oscar Wilde Archive,” was held in preparation for the Ethnic and Third-World specialization’s 12th Annual Sequels Symposium, a yearly conference that centers on the recent work of UT alumni and showcases the work of the program’s current graduate students. “The Oscar Wilde Archive” is one of two Spring Prequels — smaller events that preview the coming Symposium’s topic matter through exploratory discussion. The second Prequel, open to the public, will be March 19.

The afternoon’s talk covered topics like Wilde’s human rights efforts and his legacy. English and comparative literature associate professor Elizabeth Richmond-Garza discussed the links between Wilde’s translations and queer theory. Richmond-Garza said speculation over Wilde’s sexuality arose as scholars translated his works. She also provided the original manuscript of “Salome,” a play by Wilde, for viewing.

“I liked how they gave views of Wilde that I haven’t seen analyzed before,” English junior Carmen Hargis-Villanuev said. “You wouldn’t think you could see him in a whole new way just through studying his niece.”

The discussion was led by English Department Chair Elizabeth Cullingford.

“Since the presiding genius of today’s talk is Oscar Wilde, I think he should provide our epigraph,” Cullingford said. “He said, ‘There is only one thing in the world that is worse than being talked about, and that is not being talked about.’”

English senior Cynthia Brzostowski said the series is beneficial because it shows what English scholars can do following graduation.

“It’s always motivating to see a liberal arts degree in action,” she said. “Seeing what professionals in the field study, how they prepare and then in what forum they present their research is really interesting.”

Associate English professor Neville Hoad said it is intimidating to delve into the life and work of Wilde, who has been called the leader of the Aesthetic Movement.

“In discussing Wilde you run the risk of being upstaged by your subject’s own material,” he said. “Which is a risk I’m honored to take.”