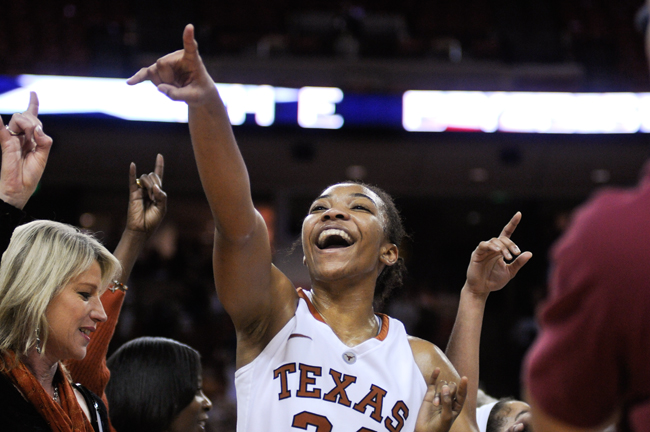 Freshman center Imani McGee-Stafford scored 13 points and 18 rebounds against Baylor and recently received the Big 12 Freshman of the Week for the fourth time this season.

Four games ago fans saw a struggling Longhorn team finally end its 2013 drought with a victory over Kansas State. Just over two weeks later not much has changed as that same team is trying to repeat an identical task.

The Longhorns are visiting the Wildcats after losing their last two games to ranked opponents Iowa State and Baylor. Freshman Imani McGee-Stafford, who was recently named Phillips 66 Big 12 Freshman of the Week for the fourth time this season, led her team with 13 points and a career-high 18 rebounds in the loss to the defending national champions Baylor.

“She was outstanding,” Baylor head coach Kim Mulkey said of the 6-foot-7 center. “She’s a big body in there. She’s not afraid of physical play. I think she’s a very good rebounder.”

While Texas looks to add only its third Big 12 win tonight, Kansas State isn’t in much of a different place. The Wildcats’ loss to the Longhorns started a four-game skid that they have yet to break, despite the efforts of senior Brittany Chambers, who averaged 20.7 points and 11.3 rebounds in the last three games.

This is the 25th meeting between the two conference foes, with Texas leading the series 13-11. The Wildcats are 5-5 when the game is played at Bramlage Coliseum, nicknamed the “Octagon of Doom.”

Head coach Karen Aston expects her team to carry the same energy into this game as it did against Baylor. She felt her team prepared for the game against the top-ranked team in the way it should have if it wanted to win in such a competitive conference.

“More than anything, and what I told them in the locker room is, I would love to see our team prepare and compete on a daily basis the way that we did for this game,” Aston said. “I think if we would begin to understand that’s the preparation it takes every single day in the Big 12, then we will begin to get somewhere.”

Published on February 13, 2013 as "Horns hungry for victory against KSU".