From Point A to Point B: UT shuttle drivers keep the schedule rolling 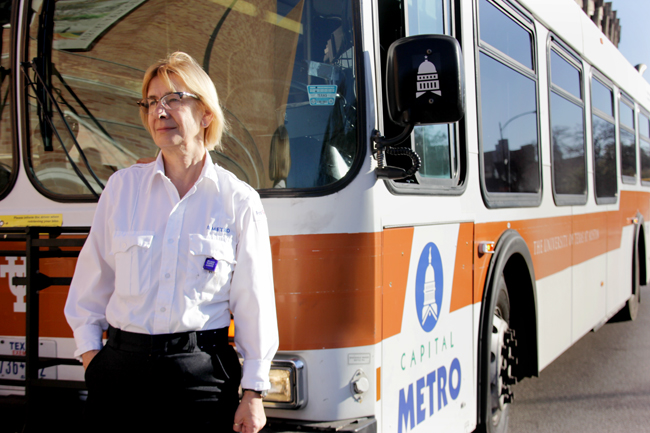 They form the core of the one of the largest university shuttle system in the country. Last year, they ferried more than 4.6 million passengers over 13 different routes, linking such areas as the Pickle Research Center in North Austin to Riverside in southeast Austin with the University.

And at the heart of it all are shuttle drivers, who operate a fleet of 87 buses and collectively work around 225 days a year to provide shuttle service to faculty, students and staff.

UT shuttles form a large percentage of transportation at the University, and therefore shuttle drivers bear a large responsibility for safely transporting students to where they need to go each day.

“Safety comes first, schedule comes later,” said Brenda Free, a UT shuttle driver for the Far West route. Free said that during the week she wakes up around 4:45 a.m. in order to start her shift at 6:30 a.m. Each bus driver works eight-hour shifts, Free said.

Despite working around the University, shuttle drivers are not employees of UT or Capital Metro but are employed by First Transit, a bus transportation provider based in Cincinnati. First Transit contracts the drivers out to the University to provide a total of 125,000 hours of shuttle service per year, Capital Metro spokeswoman Melissa Ayala said.

Watkins also said that all prospective shuttle drivers must be at least 21-years-old, proficient in English, capable of passing physical exams and drug tests and able to handle stressful situations.

Watkins said that background checks screen applicants for any records of felonies and misdemeanors along with any serious traffic violations, which if incurred within the last seven years, will usually result in the applicant’s disqualification from selection.

“They’re really strict. They look for everything on background,” said Cleo Caruthers, a UT shuttle driver who was hired a couple months ago.

Caruthers said that out of his prospective class of 20 drivers, only five made it past the background checks. In addition, most drivers operating the Capital Metro city buses need to have several references in order to gain a job as a UT shuttle driver.

“There is a strong bond among the shuttle drivers around UT,” Caruthers said. “We all graduated together and it took a long time.”

For students like Jon Barry, a structural engineering graduate student, catching and riding UT shuttles is a daily routine.

“We’re such a big school it’s hard to get so many students to live so close to campus,” Barry said.

Barry, who relies on the Red River shuttle line to transport him to and from campus, said that the shuttles are an important part of the University.

Free said transporting students is what makes the job enjoyable.

“I love driving,” she said. “I love trying to get the people on time to class.”
Marketing sophomore Mabil Zaldivar, who rides the Cameron Road line daily, said the shuttle drivers are important to students for another reason.

“A lot of the time they’re our first impression in the morning,” Zaldivar said. “It sets the mood for the rest of your day.”