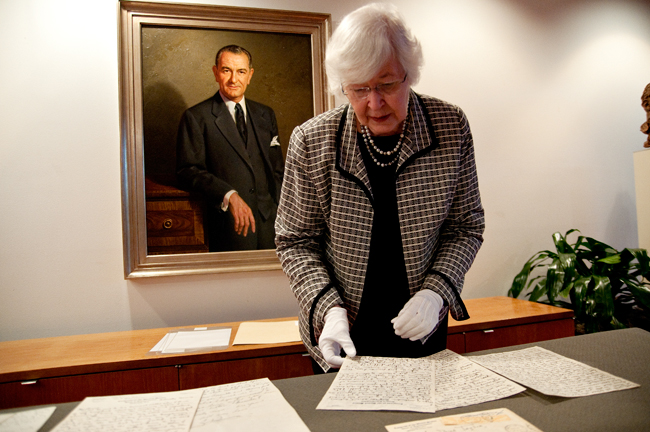 Claudia Anderson releases a collection of love letters that were written during the courtship of LBJ and Ladybird Johnson for display at the LBJ Museum on Valentines day. " />

Claudia Anderson releases a collection of love letters that were written during the courtship of LBJ and Ladybird Johnson for display at the LBJ Museum on Valentines day.

The first day Lyndon B. Johnson met Claudia “Lady Bird” Taylor, he asked her to marry him. After she said no, the would-be president and first lady exchanged 90 letters in the following 10 weeks that are now being released digitally to the public by the LBJ Presidential Library this Valentine’s Day.

“It just seemed like a good time to do it,” said Claudia Anderson, the library’s supervisory archivist. “We’ve had several requests from researchers to open these.”

After meeting for the first time in Austin, LBJ decided to start corresponding with Lady Bird, who had recently graduated from UT. Anderson said the letters show the growth of their relationship.

“She begins her letters by saying ‘I’m not going to write you every day,’ before long she is writing every day. You see her progressing from ‘I’m not sure about this’ to ‘I adore you,’” Anderson said.

The LBJ Library will be uploading transcripts of the letters and audio recordings of Lady Bird talking about their courtship, as well as pictures of the couple in 1934. Most of the material has not been previously available to the public.

In her letters, Lady Bird also mentions going to Dallas for the 1934 TX-OU football game at the State Fair and her strong relationship to the University.

“That’s when she thought of having a formal photograph made for him, [in Dallas 1934] because the photographer in Marshall make her look ‘like an ogre,’ but she didn’t have the picture taken because she couldn’t find her dress,” Anderson said.

The letters, which are not dated, were written from September to mid-November of 1934 when Johnson was a congressional aide in Washington, D.C. and Lady Bird was in Karnack, Texas, renovating her family’s home.

In one of his letters to Lady Bird, the 26-year-old LBJ wrote: “I love you — only you. Want to always love — only you.“ LBJ closes his letter with the request, “Mix some ‘I love you,‘ in the lines and not between them.“

Around three days after LBJ’s letter, 21-year-old Lady Bird responded to his constant proposal: “All I can say, in absolute honesty, is — I love you, I don’t know how everlastingly I love you, — so I can’t answer you yet.”

After their correspondence, Lady Bird agreed to his proposal and the couple married in San Antonio in 1934. They honeymooned in Xochimilco, Mexico.

Not everyone was impressed by the 36th president’s courtship style.

“I don’t think he is necessarily a romantic,” Spanish junior Kay Treon said. “I get the impression that this was his way of stepping away from the world, writing her — a sort of refuge.”

Anderson said the library plans to upload transcripts of Lady Bird audio diaries, recorded in 1964, and showcase them “in the not-too-distant future.”