‘Masterclass’ reveals a new side to the revolutionary photographer 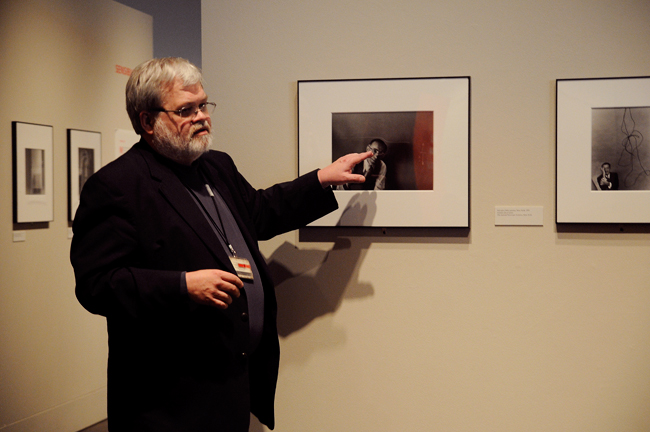 Roy Flukinger, senior research curator at the Harry Ransom Center, gives a tour of the “Arnold Newman: Masterclass” exhibition as a part of their tour training. The exhibition will be open until May 12.  " />

Roy Flukinger, senior research curator at the Harry Ransom Center, gives a tour of the “Arnold Newman: Masterclass” exhibition as a part of their tour training. The exhibition will be open until May 12.

“Pictures of People” was the phrase used by Arnold Newman to describe his revolutionary style of portraiture. With subjects ranging from President John F. Kennedy to Georgia O’Keeffe, Newman was known throughout the twentieth century for conveying the true character and nature of his subjects by emphasizing the environments in which they worked or lived. Roy Flukinger, the senior research curator at the Harry Ransom Center, worked to compile the first posthumous exhibit of Newman’s work, “Arnold Newman: Masterclass”. He discusses Newman’s ideology and how environmental portraiture influenced photography in the twentieth century.

Roy Flukinger: At the time, the accepted portrait tradition was to work within a clean, neutral studio setting and to shoot one’s subject against a white or somewhat gray background.  Newman’s style was revolutionary because he deliberately chose to depict and interpret his subjects within a off-site place customarily related to their work or profession.  His settings were therefore much more complex and aesthetically intriguing — and found great popularity with both editors and the
general public.

DT: What elements of his work does the show include? What is the focus of the show?

Flukinger: Primarily, the exhibition shows around 200 of his masterworks from all aspects of his professional career.  In addition to the portraits there are a number of his early images — chiefly abstractions and documentary works — as well as a selection of contact sheets showing the evolution of sittings for a few of his portrait sessions.  Also of significance are a number of cases which contain manuscripts, photographs, periodicals and assorted memorabilia which came directly from the Arnold Newman archive which is housed here in the Center. It attempts to give a certain perspective to his entire life. The focus of the show is to reveal new aspects of his overall art throughout his life, a deeper sense of not only his honesty and his compassion.

DT: “Masterclass” is the title of the exhibit and plays on the importance Newman gave to education. How did education and instruction factor into Newman’s idea of life and photography?

Flukinger: He was always accessible to other photographers and assistants who he trained in the art and technique of photography. He taught at many workshops. He was constantly fascinated by students and their work.

DT: How does the show educate viewers?

Flukinger: Newman was a strong advocate for education, and I like to think that he would readily approve of the way the exhibition teaches visitors about photography in general and his own exceptional work in particular.  Viewing his artworks, one can see how he worked with subjects and materials, how he made the deliberate and critical selections that reflected the artistry of his portraiture, and what went into the all the myriad visual elements that represented his industry and his elegant vision.  Plus, we have attempted to hang the show in such a manner that the viewer can experience the individual works more closely and learn from their own comparisons and observations as well.

DT: Were there benefits to Newman’s techniques?

Flukinger: He took his time, and he was very deliberate. He didn’t want them [his subjects] to feel uncomfortable, so he worked with them until they felt comfortable. If he met someone to act difficult he would work with them until he got them into the face he wanted. That deliberateness helped me take a correct picture of the person.

DT: Were his subjects accepting of his work?

Flukinger: Well, let’s just say that the early painters were so content with his work that they would trade their artwork for his portrait. He was paid by them with a piece of their artwork.

DT: How was he perceived by the public?

Flukinger: He was very popular from the beginning. He emerged through picture press in the art world in 1946, and it was something that was immediately effective in terms of his impact with people and news and feature media. He was a man with a particularly unique vision. He was always noticed by the public at the time because of the style of portraiture was pretty popular. He was accepted in an age when not many photographers were. He was capable of showing not only the face of a person but also his character.