McClellan turns it on late to lead Longhorns to victory 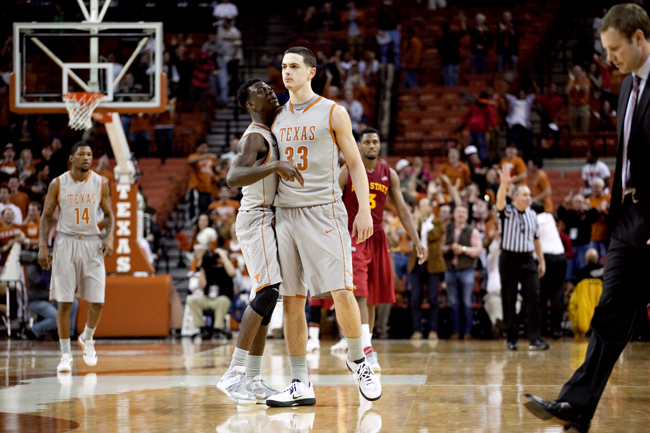 Freshman Ioannis Papapetrou celebrates after scoring the final basket in regulation, a three-pointer to send the Longhorns into overtime Wednesday.

Why Texas Won – Sheldon McClellan scored all 10 of the Longhorns’ points in the second overtime and led Texas with 18 total points. McClellan was also a perfect 8-for-8 from the free throw line and pulled down a team-high three offensive boards. With Myck Kabongo and Jonathan Holmes fouled out, McClellan took the game into his own hands in overtime and finally showed he can make tough shots down the stretch. One of the best performances McClellan has had all season.

First Half: Texas shot 50 percent from the field but turned the ball over eight times and trailed by four points at the intermission. Connor Lammert scored seven points and Kabongo logged 20 minutes of action, adding six points and five assists. Iowa State’s Will Clyburn hit all five of his free throws on his way to 11 first-half points. Melvin Ejim added eight points and seven rebounds for the Cyclones.

Second Half/Overtimes: The Longhorns and Cyclones exchanged baskets for much of the second half, but with under two seconds to play freshman forward Ioannis Papapetrou connected on a long three-pointer, tying the game at 71-71. Kabongo would score the Longhorns’ first bucket in overtime and would assist on a Julien Lewis three-pointer on Texas’ next possession. Lewis hit two threes in the first overtime, his only points on the night. The Longhorns did not miss a free throw in either overtime and shot 80 percent from the charity stripe for the game. Although three Cyclones scored 20 or more points, the Longhorns held them to 35 percent shooting from the field.

Stock Up – Connor Lammert: The freshman scored a career-high 14 points on 6-for-8 shooting, added six rebounds, four assists, three blocks and a steal as time expired in the second overtime period. He had some trouble containing Melvin Ejim on the defensive end, but Lammert really stepped up after Jonathan Holmes fouled out in the first overtime.

By The Numbers – 80: Number of field goal attempts for Iowa State, 19 more than Texas attempted.

35: Minutes Myck Kabongo played in his season debut after serving a 23-game suspension.