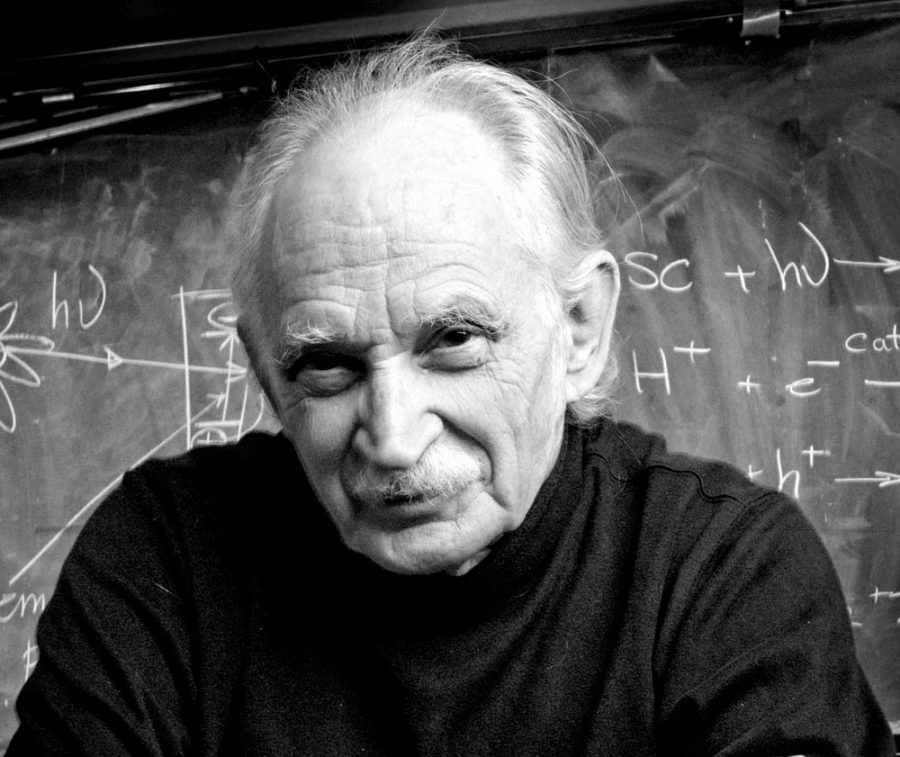 Editor’s note: UT professor Allen Bard recently received a National Medal of Science. On Feb. 1 at a White House ceremony, President Barack Obama presented the award to Bard and to the 11 other recipients (including UT professor John Goodenough). Bard’s work in electrochemistry was pivotal in the development of the scanning electrochemical microscope. His discoveries about electrochemistry and light help doctors today detect HIV and analyze AIDS. This interview has been edited and condensed for clarity.

Daily Texan: What was it like to meet President Obama?

Allen Bard: He’s a very nice guy. It was interesting.

DT: What did you learn meeting him that you didn’t know before?

AB: I think, maybe naively, that you gain something from even very brief conversations and observations of behavior. I didn’t know him at all before, except as a politician. But he came across in the interactions we had as a very nice guy who really cared about science and who was enjoying himself, I guess because his other interactions aren’t quite so enjoyable (e.g. [interactions] with Congress). He really liked it. He invited us in to take pictures with the whole family.

DT: Had you ever been to the White House before?

AB: I’d been to the White House, but just as a tourist.

DT: Did [your meeting with the president] impact the way you listened to his State of the Union speech?

AB: Probably, probably it did.

DT: What’s interesting is that, for somebody who didn’t study science himself, he is pretty enamored with it.

AB: He is. He cares about science — you heard him talk about it last night, and he cares about climate change. He’s really worried about it, it’s just very clear.

DT: The president seemed to perceive science as the cure-all to our economic and environmental ills. Do you believe that’s true? And how should we approach studying science as an educational mission of this country, when science is merging with extremely rapid technological innovation?

AB: Well, [the merging] is a problem. Science is science and technology is technology. Clearly interrelated, but they’re not the same thing.

DT: How are they different?

AB: Well, science is the pursuit of knowledge and understanding for its own sake, for curiosity for just seeing what happens when you do things. Probing into a system just to see what it’s like. Technology is the application of science to solve problems, so you have a goal, you want to solve a goal, solve those problems. So, you see, they’re different, and the reason I raise it is because science — that is, the curiosity-driven fundamentals — is getting subordinated to technology solving societal problems. It’s not that we shouldn’t solve society problems. We sure should, but if that’s all you do you’re going to miss a lot.

DT: How do you advise undergraduates to navigate those conflicting messages where sometimes they present science and technology as the same thing? And how should a student go about pursuing science for the sake of education?

AB: Well, in the teaching, I think we separate pretty well, and that we teach science in chemistry and physics and biology; we don’t teach the technology. And in fact, more and more, the engineers teach science. If you look at what happened to chemical engineering, it’s drifted more and more towards science, but it’s those scientific aspects that could have societal benefits. If you write a proposal to the National Science Foundation, which was founded to support science right from the beginning, because there was a real belief that by supporting pure science for historical reasons, you would in fact get societal benefits …  the fact is when you let people do their own thing, they make important discoveries, and those discoveries ultimately end up as benefits to society because there are new machines and new advances in electronics and communications.