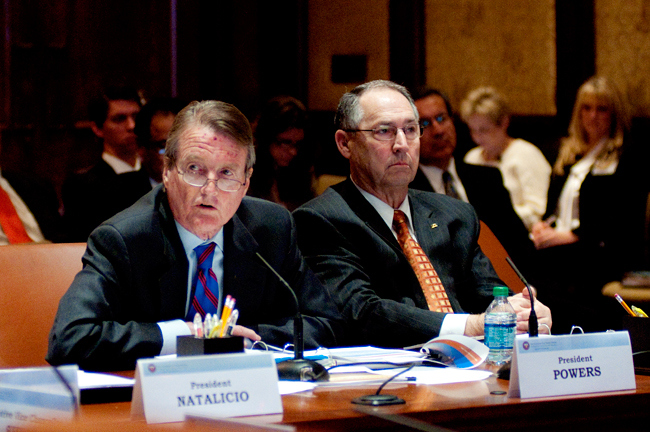 At the Board of Regents meeting Wednesday morning, UT President William Powers Jr. addressed issues and goals for the University, such as lowering the student-faculty ratio and the progress UT has made toward creating a more interactive learning environment.

Almost nine years after the Commission of 125 issued a list of recommendations for UT to better serve Texas and society in general, the University has seen mixed results.

President William Powers Jr. spoke about the progress the University has made toward the goals established by the Commission of 125, a 2004 report that recommended initiatives to create a “disciplined culture of excellence” at UT over the course of 25 years, to the Board of Regents’ Academic Affairs Committee on Tuesday.

One major goal of the commission was to lower the University’s student-faculty ratio to 16:1 by 2014.

“The quality of education the Commission seeks for UT students can be achieved only if there is direct and meaningful engagement between students and professors,” the report read. “The student-faculty ratio is an important and traditional measure of a quality undergraduate education.”

Regent Wallace Hall Jr. questioned why the University has made little progress on the goals of the commission.

“As I look through the student-faculty ratio, I see virtually no movement, both at the department level and the college level,” Hall said. “Graduation rates, course loads, retention rates — how do we accomplish these goals?”

Powers acknowledged his concerns but emphasized that gains in technology mean the significance of the ratio has changed.

“I do think there are ways of looking at whether the student-faculty ratio set under conditions in 2004 as a benchmark are appropriate today,” Powers said. “It turns out, there are ways of using course transformation technology to make large classes more interactive.”

“I don’t know what the student-faculty ratio ought to be 10 years from now,” Powers said. “I would be surprised if technology doesn’t alter that answer.”

At the same time, Powers said he agreed that lowering the faculty-student ratio is an important part of being competitive. He attributed the lack of progress in part to decreased funding.

The board’s Academic Affairs Committee also approved implementing a four-year guaranteed tuition plan at all nine academic institutions in the fall of 2014. A statement issued by the System said the board is likely to approve the change Thursday morning.

Powers also said the search is set to begin for a dean for Austin’s new medical school, which will be called Dell School of Medicine, and addressed questions from the regents about insufficient funding for graduate student stipends.

“Having very robust graduate students is absolutely critical, and we are way behind our competitors,” Powers said. “If we’re really going to be at the top, we need to be able to compete in terms of graduate stipends.”

The board will discuss and approve contracts, tenure appointments and past minutes at their meeting Thursday.

Printed on Thursday, February 14, 2013 as: University's goals in question