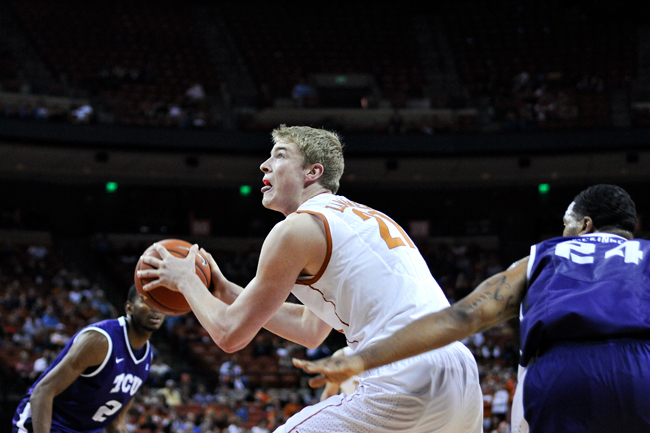 Freshman forward Connor Lammert (21) scored a career-high 14 points in the Longhorns’ double overtime win over Iowa State. Texas is seeking its first road win at Kansas in over two years.

During his 23-game suspension, Myck Kabongo was unable to travel with the Longhorns, but on Saturday he will start on the road against Kansas with a double-overtime home win over Iowa State under his belt.

He’ll face quite the road test in his second game back. It’s been two years since Texas last won in Lawrence, and the Jayhawks are a few days removed from a big win over in-state rival Kansas State.

But before their dominant win over the Wildcats, the Jayhawks had lost three straight Big 12 games including a home loss to Oklahoma State. The loss to the Cowboys snapped a 32-game home winning streak dating back to last season.

Freshman Ben McLemore leads Kansas in scoring at 16.8 points per game and is coming off his second 30-point game of the year. McLemore scored 16 against Texas in the Jayhawks’ 64-59 win in Austin on Jan. 19.

“I do think Myck being in the lineup will give us another perimeter defender and allow us to put another defender on McLemore,” assistant coach Russell Springmann said.

Kabongo may have missed the last ten minutes against Iowa State earlier this week, but he brought life to Rick Barnes’ offense just enough for Texas to hang on for the win in double overtime.

Connor Lammert found out just how beneficial Kabongo’s presence could be for the Longhorns, scoring 28 combined points in his return. Lammert had a career night and made sure the game would not reach triple overtime, showing some serious grit in the extra periods.

“We’re 1-0 with our full team,” Kabongo said in a brief statement following the game.

Kabongo has been practicing with his teammates all year, and now he gets the first chance to travel and play with them. With his presence on the road the Longhorns may finally stir up the confidence to win their first game on the road since November 21.