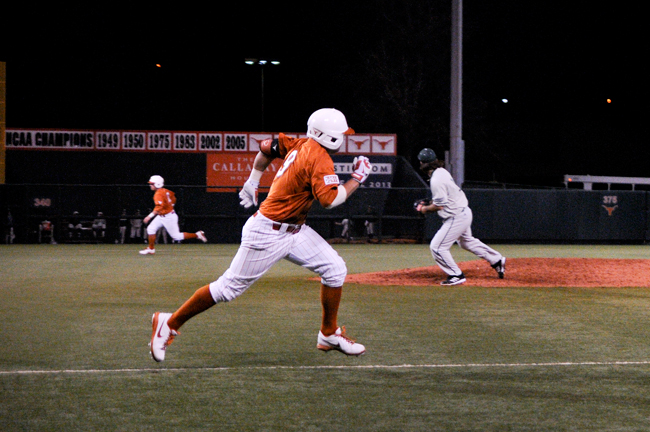 Freshman C.J Hinojosa, in his college debut, went 3-for-3 with an RBI in the game against Sacramento State Friday night.

The Longhorns (1-0) pulled off a 6-5 win over the Sacramento State Hornets (0-1) on Friday night at UFCU Disch-Falk field. After cruising to a 6-0 lead, the Longhorns bullpen gave up five runs in the top of the eighth. Thanks to a few well-placed outs and bit of luck, the Longhorns held on to the slim lead and pulled off the win.

The Longhorns played powerful offense on Friday night, a stark contrast from 2012. Junior right fielder Mark Payton went 4-for-5 with two runs and three RBIs. Freshman C.J Hinojosa, in his college debut, went 3-for-3 with an RBI.

“I just try to clear the paths,” Payton said of his RBIs.

Sophomore Parker French started on the mound for the Longhorns and pitched a solid seven innings of work while surrendering no runs on three hits. After throwing only 100 pitches, French came out with the Longhorns up 6-0.

After French left the game, a Texas pitching meltdown brought the score to 6-5 in favor of the Longhorns. Freshman Toller Boardman came in for Texas in the eighth, but after giving up four runs, the Longhorns opted to bring in junior closer Corey Knebel to try to salvage the eighth inning.

“Baseball is a cruel game,” Texas head coach Augie Garrido said after the game. “We beat them eight innings out of nine and we still almost lost.”

Knebel, in unusual form, struggled and was taken out after surrendering one run and two hits without recording an out. Junior Ty Marlow came in for Knebel as the third pitcher of the inning.

With the bases loaded, junior catcher Jacob Felts picked off the runner at third after Marlow’s first pitch. His timely play eliminated the force at home and allowed the Texas defense some room to breathe. A single by Sacramento State loaded the bases again, but a fly-out to second base followed by a strikeout form Marlow saved the inning.

“Ty [Marlow] did good. He’s not a prospect…he’s not going to be an All-American,” Garrido said. “He’s a ball player…I’d rather have ball players than prospects.”

The bottom of the eighth was uneventful for the Longhorns. Payton, who had been dominant through the first seven innings, struck out swinging with two outs to end the inning. In the ninth, the Longhorn defense surrendered only one hit but put together a solid three outs facing only four batters.

The Longhorns will face the Hornets on Saturday afternoon at 2 p.m.